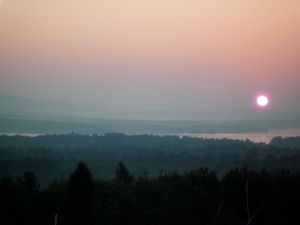 We have just sweated through an uncommonly hot,  humid and hazy week. Here on the east coast, that means ozone levels rise as well, so I’ve limited my activity outdoors to short walks. Temperatures in the mid nineties weren’t enough to keep Peter off his dirt bike; he strapped on his Darth Vadarish boots and heavy protective gear and roared along the paths in the woods  along with his friend Liam.

It has also been a week of parties on the hill, as our dear friends/former neighbors Pat and Will have been paying their annual visit. We’ve raised our collective cups more than once to life, laughter and good times. There was hope that hurricane Earl would push some rain our way, but we experienced only a brief shower last night. This morning there is a strong, cool wind whipping through the trees, and that has at least cleared the air.

Today I have found my thoughts circling back to September five years ago:  I had concluded four grueling rounds of chemotherapy (cisplatin/taxotere) and David and I were meeting with my oncologist for the first post chemo scan. We had every hope that I would be declared cancer free. However, although Dr. Lynch remained guardedly optimistic (I had yet to learn that this was his usual bedside manner), he explained that there was a 4 mm ground glass nodule in my right lower lobe; possibly inflammatory in nature but concerning for cancer. The nodule had in fact first appeared on a scan in June just as I began infusion; if it did represent a malignancy, the cancer had not responded to therapy. I left the appointment incredibly disheartened.

We had barely wrapped our minds around this news when I received a phone call from my eighty three year old father, Ollie. He fought back tears as he told me that after several months of abdominal discomfort of unknown origin, he’d been diagnosed with stage IV pancreatic cancer.

Almost unbelievably, he initially decided to fight it. He secured an appointment at MD Anderson in Houston and within days chemotherapy was scheduled. It was also several weeks after Katrina had hit, and another hurricane was threatening the gulf. After being discharged from the hospital, my dad and stepmother ended up getting stranded for many hours in a giant snarl of traffic as people attempted to evacuate the city. It was not a fortuitous start to what ended up being an incredibly sad and rather hasty end to my father’s life.

After the first debilitating infusion, Ollie declined more therapy. In mid October, David, Peter and I flew to his home in Texas, and my sister Bink and brother John met us there.

It was a very emotional but ultimately unsatisfying visit. I had (perhaps unrealistically, given his lifelong reticence) high hopes that our father would be able to really talk to us about what was happening; not just to him, but maybe about my own cancer as well. Although he was visibly pleased to see us, he shared very little and actually seemed to withdraw further. Saying goodbye was perhaps the hardest thing I’ve ever done.

In great pain, unable to eat, he began to lose touch with reality yet somehow managed to hang on through the third week of November.

I was calling every day, sometimes twice a day for updates. The last time he was able to speak to me was perhaps a week and a half before he died. He simply said (with almost child-like wonder) “Linnea–I’m still alive!”

In early November, a shipping container of furniture had been shipped to Marfa, and David felt it was imperative that he go there to unpack it. Not only was Ollie failing fast, David  was to be gone for thanksgiving and would not be returning until the evening of the 26th–my birthday. It couldn’t have been worse timing, and in hindsight, we never should have let it happen.

I was also contending with a very abrupt menopause as a side effect of chemo; the physical and emotional adjustment was quite difficult. I experienced severe urinary tract discomfort related to the hormonal changes, and at one point ended up in the emergency room.

And then, on thanksgiving day, Ollie died. I was inconsolable. Fortunately, friends had invited Peter to spend the day with their family and I was not alone, as Jemesii had come home for a few days. And then my sweet girl, who really didn’t know how to make much more than a pie, went to the grocery store and bought a rotisserie chicken, gravy in a jar, and cranberry sauce. She also whipped up a canned green bean and mushroom soup casserole (just like the ones we had in my childhood). Jemesii has always had a nurturing spirit, and on that bleak day she was my strength as well.

This entry was posted in Death and dying. Bookmark the permalink.