Summer: all things must end

Just a couple of weeks ago, Peter picked this bounteous collection of blackberries in the brambles out back. He then set up shop at the end of the street, selling 4 oz cartons for $2.00 each. He sold out quickly, and our young gentleman farmer added pink lemonade ice to his menu.

Several mornings ago Pete and I traipsed through the brush to gather more berries, but for the most part they’ve already gone by. There is also a definite chill in the air at night, and a few leaves are changing color as well. Ah summer…

Yesterday I enjoyed a solitary  meal of shrimp cocktail, corn on the cob and sun burst tomatoes (Peter called them ‘nomas’ when he was a little guy) out on the deck; I was entertained by the circling hordes of dragon flies. 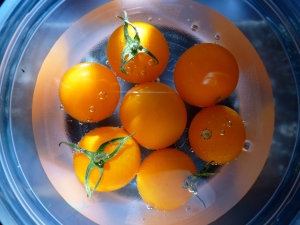 Seasons and the cycle of life. Everything that lives must die.  Recently I was speaking to two very close friends about some of my concerns for my three children in regard to my own passing. “Don’t even think about it!” one of the friends interjected. But I do, because it is part of my reality. As I explained to my friend, even though I look so healthy and full of life, when I awaken in the morning I hear the wheeze in my lungs. I remain active, but I can’t help but note my slowly increasing shortness of breath. I’ve lost a bit of weight and have become aware of other subtle signs that my immune system is once again struggling with a pernicious invader.

I acknowledge that I am going to die:  advanced lung cancer is not classified as a terminal illness without reason. Although that fact was not initially easy to accept, I am fortunate that I have had some time to work it out. As I said to Jemesii one day (gotta love those adult children, I can be my baddest self in front of them), “thank goodness I’m dying slowly”.

I’ve had the luxury of being able to move through all the stages of grieving: denial, anger, bargaining, depression, and, finally, acceptance.

I’ve also come to understand more about the nature of fear, and that it is inextricably tied to a lack of experience and things unknown. Cancer, or the big ‘C’, is right up there near the top tier of all things fearful. When first diagnosed, I was terrified. But not anymore. Sad, tired, pissed occasionally, and even a little bored.

The same goes for dying. Death has become my familiar. Not a friend or someone (indulge me in a bit of anthropomorphizing) I would invite into my home; but an oddly intimate and somewhat constant presence.

As uncomfortable as it may occasionally make those close to me, I believe it is important to honor my need “to go there”; to actually embrace (however reluctantly) my own mortality.

It is in no way a morbid obsession; I could hardly be more engaged in the act of living. My willingness to look clearly at what what lies ahead has allowed me to really understand the terrain, and so I can better prepare. Hopefully, not just myself, but those I am close to.

After all, death is really just part of life. You can’t have one without the other.

This entry was posted in Death and dying. Bookmark the permalink.

21 responses to “Summer: all things must end”