Tag Archives: Cancer and our children

All three of my kids are within an hour drive now.

I can’t tell you how happy that makes me.

The last five years have been both challenging and ripe with opportunities for personal growth. Living alone has allowed me to get back to me, in a big way. However, this independence has not been without collateral damage.

When I left my marriage I ripped apart the fabric of my family as well. Changing my own circumstance negatively impacted the lives of those I love, and it was not a decision made lightly. It is never easy to be the agent of change.

I think I can safely say that we have all adjusted and are in a better place now. Certainly I understand far better, well, so very much. It had gotten difficult to see through the lens over my former existence and it would not be hyperbole to say I see things clearly now.

Having my son August in house has been wonderful. I had forgotten how much I enjoy the simple act of cooking for and eating with another. And his brother has been coming by more often and it is a joy to see the two of them interacting.

I’ve also been able to spend some quality time with my daughter Jemesii—last week I dropped by her to store to gift her with a crown; this girl was born a queen. I have my scan review in Boston on Tuesday and I will be meeting Jemesii for breakfast beforehand.

Posted in Cancer and our children, Uncategorized

Pete and his proud Mama

My son Peter has always been one of those rare individuals who is completely self motivated when it comes to school/education. I like to think that parental influence came into play (like the day we bought forty children’s books at Salvation Army for ten cents a piece and then sat down and read them all at once). However, as the mother of three I am only too aware that when it comes to personality and character, they are who they are, and no amount of parental influence is going to change that.

When it came to schooling, circumstance dictated that Peter moved around a lot, with two years here and two years there. Several of his schools had a real hippy vibe (one of them was on an ashram). One blissful year we homeschooled and spent a whole lot of time at the beach, in the woods and at our second home in Marfa, Texas. Undoubtedly he gained something wonderful from each of these schooling experiences (and became quite skilled at making new friends). But midway through the eighth grade it became clear to me that Peter needed something more. We were living in Meredith NH at the time and David (my ex husband) was working from home so we had some flexibility.

My research turned up a charter school in Nashua NH called The Academy for Science and Design which sounded like a great fit. In order to gain admittance a prospective student had to pass some rather rigorous exams. Peter crossed that hurtle and I started house hunting in earnest. After I found a lovely home in an adjacent town I prepared my arguments: better school which was tuition free, lower mortgage on a beautiful home significantly closer to MGH and two major airports. David and Peter were in and we took the leap.

The Academy of Science and Design proved to be a good academic environment for Peter as he tackled a curriculum heavy on math and science. At the same time, things weren’t going so well with our marriage and my health. It occurred to me that perhaps our son needed a village and I began to look into boarding schools. Much to my surprise, many of these institutions had hefty endowments and offered ample financial aid, making such a move potentially doable.

My criteria was that the school be no more than two hours away, so that we could visit often. Peter (reluctantly, poor kid was tired of changing schools at this point) and I began to tour and interview. Just as I started chemotherapy, we began the application process. I would lay wrapped in blankets on the couch as Peter would compose his essays. Somehow, someway, the two of us (David was totally hands off on this process) got through it. And again, somehow, someway, Peter was accepted to what some consider to be one of the best prep schools in the world, Phillips Exeter Academy. And he was offered a substantial financial aid package.

At that point, David jumped on the bandwagon. Peter surprised me by deciding that he would repeat a year (something that is not uncommon when you switch to a prep school). He began the first of what would be three years at Phillips Exeter.

Now a senior, we have once again gone through the application process, but this time for college and with a good deal more assistance (my dear friend Melinda and the fabulous college counselors at PEA). Last week Peter learned that he had been accepted to MIT, or the Massachusetts Institute of Technology. To say this is an accomplishment–yes, I am tooting my son’s horn–is a gigantic understatement. His father and I are thrilled beyond belief for oh so many reasons. First, because Peter has wanted to attend MIT ever since he was a small boy. His participation in Camp Kesem (staffed by MIT students) only increased that desire, as did his internship last summer at the KOCH Institute for Integrative Cancer Research. Secondly, it opens up a whole world of possibilities as he embarks on his college career. Thirdly, he will still be close to home. I can’t tell who how much that means to me, his father and his sister Jemesii. Here’s to you, kid. Mama couldn’t be any prouder.

Posted in Cancer and our children, Uncategorized

And in the meantime…. 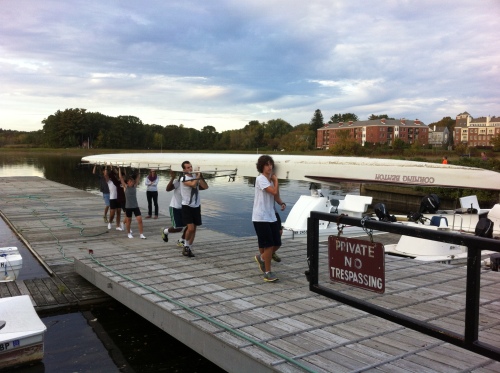 Life does of course go on. Two weekends ago we enjoyed spending time with Pete during parent’s weekend at Phillip’s Exeter Academy. Attending Peter’s classes was super—what a great bunch of instructors and an equally impressive group of students. Eating in the cafeteria was kind of groovy (although I had a misadventure to be shared in another post). And…meeting all his friends and some of their parents as well was absolutely fabulous.

Pete’s in the back of the boat

We also got to attend a crew practice and to see Peter (still a novice, but loving it) in action. It was a beautiful day in what has been the tenderest October I can recall—just glorious.

Pete then came home for two days, much to Buddy’s delight. And of course, I was able to sneak in some cuddle time; moments which are all the more precious for their infrequency.

Was it the right thing to do—sending Peter to boarding school? Absolutely. It is going to be a real life changer for him, and I couldn’t be happier (and yes, I take a fair amount of personal pride in having initiated and orchestrated this opportunity). Thank goodness David has been totally on board with it as well; financially it is a major commitment and not something that could have been realized without his support.

Of course, from a strictly selfish perspective I am admittedly lonely without the daily presence of our youngest child—particularly now. However, I’m also relieved that Peter is removed from the current fray; as difficult as the coming weeks/months shall be, it is made easier to know that Peter is busy with his own private world.

And I have to believe he is extraordinarily well taken care of:  last night I received a phone call from someone in the infirmary. Pete had gone there with migraine-like symptoms, and the PA on duty called to see what sort of work-up Peter has had previously. This is a relatively new problem, and so they will now refer him to a doctor.

While I had the individual on the phone I did make one request: “Please tell Peter to call his Mother. Tonight.” Worked like a charm—fifteen minutes later I was on the phone with Pete (who was already feeling better).

Posted in Cancer and our children, Changes

The photo shoot with my pal Sadie (Sadie Dayton Photography) turned out even better than I could have imagined. Literally done on the fly—no stylist, no make-up artist, no wardrobe—no matter! Even allowing for my personal bias regarding both the artist and the models, I think these photos are absolutely splendid. Thank you Sadie!

Posted in Cancer and our children