I have been dawdling, aka, procrastinating. If I don’t hurry up and write about my brief time in Las Vegas, I shall forget all the salient details.

A night in Vegas was borne of necessity. David thoughtfully made my reservations for this trip but had booked a flight on Sunday morning that left Vegas at 7:30 a.m. If you  subtract the two hours it takes to drive from St. George, Utah to Las Vegas, Nevada—add back an hour (different time zones), and then allow for a six thirty a.m. arrival at the airport, I would have been catching a shuttle at 5 in the morning. If there was one.

Well, my very thoughtful brother John decided this was unacceptable. John and his wife Amanda would be spending Saturday night in Vegas anyway, and he changed their room to a suite with a pullout bed. He even offered to ferry me to the airport in the morning, but the 6 am shuttle was going to be just fine.

That night the three of us went out for a meal that has earned a spot in my top ten ever. And having lived in the Bay Area of California for quite a few years (where fine dining is a given), that’s saying something.

The name of the restaurant was Lotus of Siam. Located in a strip mall, it didn’t look like much from the outside. In fact, if it hadn’t come so highly recommended, I would have expressed a wee bit of concern. All part of the charm. The unimposing facade opened into two large and noisy dining rooms, and the smells wafting through the air were inviting. 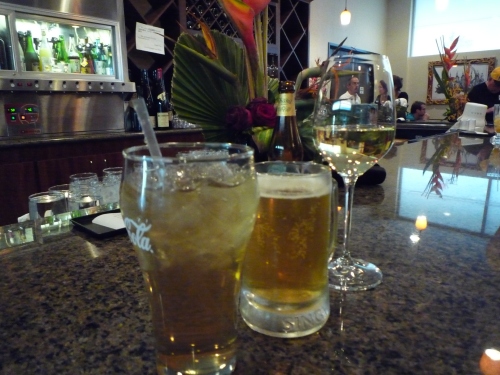 After a bit of a wait at the bar (where I nursed a sickly sweet lemon grass drink–sans alcohol), we were ushered to a table. Amanda is of Thai and French descent, and well versed in Thai cooking. She is also very picky (girl knows what she likes), so we were eager to see if the food met her high standards.

John and Amanda started with Snowmaiden Sake, which is served cold and unfiltered. As this was Vegas, I had a tiny, tiny bit. Delicious. And then the food: Chicken satay (mind-blowingly good) spicy chicken wings, som thum–a salad made from green papaya, chilis, tomato, and crushed peanuts mixed with lime juice, fish sauce and sugar. Sticky rice, larb (the only dish that was underwhelming), chicken pad thai (sublime), a spicy mango salad with fresh coconut, thom yum koong–a hot sour soup with shrimp, lime juice, lemon grass and straw mushrooms (superb) and chicken panang, with coconut milk, Thai basil and chili–savory sweet and omg delicious. We finished with the freshest coconut ice cream ever.

If my taste buds hadn’t been in such a state of sensual bliss, I might have had the presence of mind to take a photo. As it is, you will just have to close your eyes and imagine. And by the way, Lotus of Siam got Amanda’s seal of approval.

Well, that was our Vegas experience. Next up: leaving Vegas.