Monday was an odd day. I got up late as I was still having trouble sleeping, and the first thing I did was log onto my computer. A message popped up on the screen informing me that the clock had been set to expire in 2001. ?! Sure enough, even though it was now the 2nd of January, 2012, the little calendar icon at the bottom told me it was the 31st of December, the time was 7:30 pm, and when I clicked on CNN under news, it was all about the New Years Eve celebrations  currently under way. Remember the classic Bill Murray film Groundhog Day?

David did a little of this and a little of that and my computer returned to the proper time frame. I had a scheduled 11:30 am appointment for labs in Boston, and I was going to be late.

When I pulled up to the Yawkey building a little before noon, there were big plastic barriers blocking the entrance. The garage had the usual number of cars, but when I got off the elevator and stepped into the lobby, it was eerily quiet. And when I arrived at Yawkey 7B, the doors were locked and the waiting room empty. Now this was a fine kettle of fish.

The first thing I did was to call David and have him check my printout calendar, just in case I’d made a mistake. But, in fact, I was supposedly in the right place at (almost) the right time. As Boston is a good hour or more (depending on traffic) from my residence, and this was just a blood draw, I was in no mood to come back the next day. A phone call later, and I was in Infusion, which was open with a smattering of patients and staff. I explained my situation and after several more phone calls, I got my blood drawn. Everything was back on track.

On a much more somber note, my friend Rob (who, along with his wife Leslie, sent me the wonderful groundhog puppet), has not been doing well. It would seem he gets one issued resolved only to have another, more serious symptom pull the rug out from beneath his feet. Christmas Eve was Rob and Leslie’s second anniversary, and he entered home hospice not long after. He is always on my mind, and I wished to write about Rob, but struggled mightily with how to do it.

Leslie and Rob have published a blog together ever since his diagnosis, and Leslie’s post dated December 27th, described in a straightforward and beautiful fashion the current situation. I asked her permission to reprint it here. Should you like to catch up on their story or receive updates, simply click on this link: Rob’s Adventure, sailing upwind in a storm.

Rob was sprung from the hospital on Saturday and was able to spend Christmas eve at home – the best anniversary present ever. On Christmas day our dear friends John and Jo Ann brought a wonderful dinner of fresh crab and smoked salmon, which we were able to enjoy with Rob’s sister Marnie, who flew in from Rhode Island. Rob is now completely bedridden and sleeps much of the time, but he is comfortable and in no pain (he no longer needs any pain meds). This is remarkable since only a couple of weeks ago he was in excruciating pain from the sciatica — at least the radiation therapy worked for those symptoms.

His desire for food and drink has diminished, one of the signs that the end is growing near. There’s no way to know exactly how much time he has left, but we are focused on making his remaining time as comfortable and full of love as possible. The Hospice by the Bay team has been wonderful. It’s reassuring to know that there’s a number I can call 24/7 for help with any issue that might arise.

Thank you to everyone who has written. I read every letter and email to Rob, even though they are bittersweet for him. He especially likes to remember stories from his adventures over the years. Hearing is supposedly the last sense to go, so please keep them coming.  He is incredibly sad that his life is being cut so short. One of the social workers explained that while we are losing him, he is losing all of us — everyone and everything in his life. Unbelievably difficult.

A number of friends have asked about visiting. Rob is sensitive to having people see him in this diminished state, and has asked that this final time to be spent privately with family and only a few friends.

Please keep Rob and Leslie in your thoughts.

Before moving on down the trail…

Time to tell my tale. It begins with a prelude: a couple of weeks ago I received an unexpected parcel from California. Inside were some fresh coffee beans from Peets as well as an assortment of other gourmet goodies, and a woodchuck (aka: groundhog, land-beaver, whistle-pig). Or, rather, a plush woodchuck puppet. The senders were my friends Leslie and Rob. I met Leslie last spring at the National Lung Cancer Partnership Advocacy Summit. We discovered that her husband Rob and I shared a diagnosis of NSCLC as well as an ALK mutation. Some weeks later, I was able to make Rob’s acquaintance when he and Leslie came to the Boston for a second opinion regarding his treatment. We all went out to lunch (Rob’s sister joined us), and it quickly became apparent that the four of us had so much else in common and a friendship was born.

Well, much as I have my white circles, my eleven elevens, my lucky charm and other talismans, Rob and Leslie have a woodchuck. It is an old family tradition (with perhaps just a bit of cheek) to point the woodchuck in the direction of those needing a dose of good fortune. They decided it was time for me to have my very own woodchuck. I’ll introduce him soon. But first, a picture Leslie took of Rob and his whistle pig (who seems to be partaking of a bit of infusion): 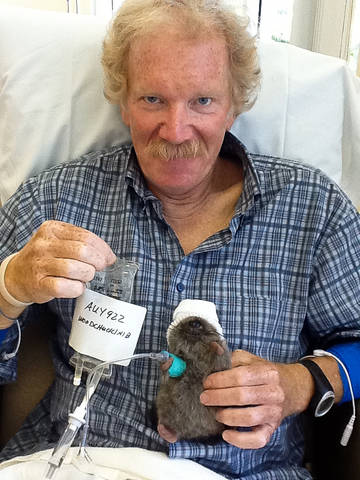 Here's looking at you, Rob!

Leslie and Rob write a blog together which can be found at:

It is illustrated with Leslie’s amazing photos and is a diary of Rob’s diagnosis and treatment as well as a glimpse of their full and adventurous lives. The blog is generous, smart and so much fun; just like Rob and Leslie.