Cover girl and a back story

I was in Boston on Monday for labwork, and just adjacent to the elevators is a wall rack where they display current issues of the MGH Cancer Center magazine. On the cover was a familiar image, a CT scan of lungs pre and post crizotinib. Although not identified, they are my lungs. So, I guess that makes me a cover girl.

While there I also paid a quick visit to my friend Sarah Broom (a poet: https://lifeandbreath.wordpress.com/2011/09/06/if-the-world/), who has traveled from her home in New Zealand to enroll in a Clinical trial at Massachusetts General Hospital. We had gotten together the previous week for lunch and on Sunday Evening she’d driven to our house in Amherst with her brother Alex, who was visiting from Australia to be with Sarah as she started trial (her husband is at home with their three young children). The meal on Sunday (local lobster) was really pleasant and Sarah’s brother is every bit as charming as she.  Afterward they managed, for the most part, to stay on the right side of the road (which would be the wrong side of the road ‘down under’) on the drive back to Cambridge.

But more about Sarah and that back story. Back in August of 2008, when my oncologist (at that time, Dr. Tom Lynch) told me that as a newly identified ALK ‘mutant’ I was eligible for enrollment in the phase I trial for PF-02341066 (crizotinib), the trial was transitioning from an initial focus on gastrointestinal cancers to lung cancer. Only one other lung cancer patient had been on trial at MGH, and he had died within weeks of enrolling (his lung cancer was responding to crizotinib, but his disease was ultimately too widespread). Although this news did nothing to alleviate my fear, it also didn’t dampen my enthusiasm; possible death (trial) versus certain death (continued tarceva, chemo, or no treatment at all).

It was but a few weeks later that I became aware of Kevin Brumett, after my husband conducted an internet search for information on ALK mutations. Kevin had posted on Inspire, the online site which I soon joined and continue to participate in. I contacted Kevin, also an ALK mutant. He had been on trial at Dana Farber for some weeks and had recently gotten back his first scans, which showed significant improvement. Kevin immediately became my beacon; this courageous and incredibly optimistic young man who was just ahead of me on this path to who knew where.

I started trial on October 1, 2008 and soon thereafter Kevin told me of another fellow traveler, Sarah Broom, in New Zealand.

Unfortunately Kevin developed a large number of brain metastases early in 2006, and it was at that point that it began to be clear that crizotinib might not cross the blood/brain barrier. Several months later, Kevin died and Sarah and I fell out of touch for a time as well.

Perhaps a year and a half ago we began emailing again and eventually spoke on the phone as well. Now, in a curious turn of fate, we are in the same place once more, each enrolled in clinical trials. LDK378, which is a second generation ALK inhibitor for me, and AUY922, an HSP-90 inhibitor for Sarah. There is a good chance I will eventually go on AUY922 and she on LDK378. Talking at dinner the other evening, we figured that we are number three (Sarah) and number four (myself) in the world to have gone on crizotinib–(although I might have to share number four with another individual who went on trial either the day before or after me at MGH).

It’s all rather remarkable. Our friendship, begun in the most unlikely fashion, the distance we have each traveled (more metaphorically speaking when I refer to myself, but in Sarah’s case, coming from New Zealand, the real deal). The fact that we are both still here, trudging forward, looking for sure footing.

As for those liver enzymes; falling. SGPT is 66 and SGOT is 62. And the wine tasting party? So much fun (hosted by the same fabulous friends who made 11/11/11 special for Pete and I). Part of the evening involved a little contest; we were served pairings and asked to distinguish between labels/vintages. Well friends, my fellow contestants were all quite able, but out of a field of twelve, I tied for first after getting them all correct. My secret? Not mere luck, but rather a reliance on instinct (a superior tool in matters of the senses–but I was nonetheless surprised as well as mighty pleased by my little coup).

My prize? A  lovely bottle of sauterne and liver enzymes headed in the right direction. Win win. 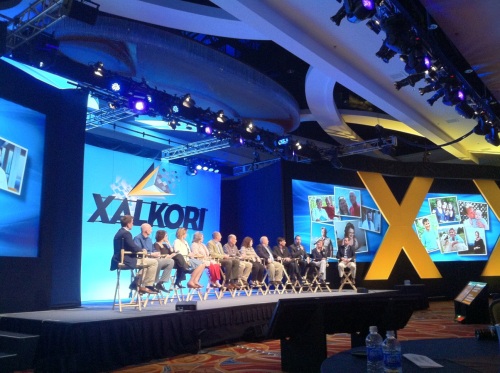 We take the stage

From the evening of October 25th through Thursday morning on the 27th, David and I were guests of Pfizer at the Copley Square Marriott in Boston. We were in attendance for the patient portion of the Xalkori launch.

After registering on Tuesday, I located the ballroom where Alice (Dr. Shaw) was scheduled to speak. An interactive display had been installed in the foyer with patient photos and videos, and as I was checking those out I ran into the speaker herself. There was time for a quick hug before she took the stage and I slipped into a seat at the back of the room.

Alice recounted a brief history of the PF-02341066 trial to an audience of about 350 Pfizer employees; the majority of whom were pharmaceutical reps. She was joined onstage by Robert Martensen, an author and physician, who happens to have ALK+ NSLC  and who began taking Xalkori last summer. Of special note, the histology of Dr. Martensen’s lung cancer is squamous, so here is a splendid example of the old exception to the rule theory.

It was interesting to hear the dialogue between two doctors; one of whom was also the patient. At the conclusion of their presentation, we had a ‘practice’ session, and I was able to meet the other ten patients whom I would be joining for our portion of the program the following morning. All of them, (except for myself) were current participants in phases II and III of the crizotinib (Xalkori) trial and had enjoyed positive results that ranged from stable to a whopping 100% response.

On Wednesday morning the eleven of us, plus our caregivers, made a rather dramatic appearance onstage as we lined up behind a white scrim which was then dropped at our feet (the reveal!). After we were individually introduced by the moderators (hello Jonathan and Chris), our families retired to the audience.

It was a moving experience, as each patient took turns describing the impact Xalkori had made on their lives.  I found it rather an amazing vantage point as well; looking out over the sea of faces in the audience, many of whom were wiping away tears.

Each patient was given a chance to answer some prepared questions. When it was my turn, I commented that it wasn’t exactly fair that the moderators were the only ones with teleprompters, given the fact that most of us on stage had done some really hard drugs.  I also asked the audience to take a good look at the eleven hale and hearty individuals (patients) in front of them and to remember that we each had stage IV lung cancer. Given the ravages of the disease as well as the difficult side effects of most traditional treatments, our current state of health was perhaps the most amazing thing of all. Not only had Xalkori given us more time, it was quality time.

After the session concluded, we had the chance to meet some of the people behind the development of crizotinb, including Keith Wilner, Pfizer’s Senior Director of Clinical Research, and then perhaps the biggest rock star of all,  Dr. Jingrong Jean Cui, the scientist who invented crizotinib.

Dr. J. Jean Cui with some of her biggest fans

Jean is the epitome of intelligence, diligence, humility (!) and creativity. She shared with us a tantalizing glimpse of just what lay behind the synthesis of a complex molecule that would become Xalkori.

And this is it: Xalkori

Pfizer thoughtfully arranged a luncheon for the patients and their families, and we were joined by several key members of the team involved in development to market phases of PF-02341066/crizotinib/Xalkori. Possibly not your usual cafeteria chatter.

I had overheard that there would be a tribute to my friend Kevin Brumett, who was one of the very first people in the world to go on what was then know as PF-02341066. Kevin passed away in May of 2009, just a week after marrying his sweetheart, Stephanie Fellingham. With his boundless optimism, energy and generosity, Kevin touched the lives of many. In January of 2009, he had been invited to speak at the Pfizer laboratories in La Jolla, an experience he found profoundly moving. It was only fitting to close the Xalkori launch with a tribute to this exceptionally brave young man who eagerly went down what was then an unproven path.

There was time for a short and much needed break; I felt emotionally tapped out at this point. Then we crowded into buses with the pharmaceutical reps to join in a team building exercise at yet another venue. It was actually a great chance to get to talk to more people, and the product of the exercise was some lovely murals for The Lung Cancer Alliance of Massachusetts.

When finsished, we moved upstairs for dinner, and once again I enjoyed having the chance to converse with members of the crowd. An unsolicited plug for Pfizer here; I was truly impressed by both the sincerity and level of commitment exhibited by their employees. Just a really great group of people.

Just when I thought this day couldn’t be any more meaningful, Dr. Tom Lynch, my original oncologist and now Director of the Yale Cancer Center, walked up to our table. After a few moments to catch up, he took the podium, and knocked the socks off a crowd that on the third and final day of the Xalkori launch, was by all rights exhausted. Tom possesses the uncommon combination of brilliance and a real knack for performance; he is a phenomenal speaker. And his enthusiasm is absolutely infectious. And, of course, I couldn’t help but be pleased that he included the before and after image of my lungs (pre and post crizotinb/Xalkori; nice to see them on the big screen!).

The evening concluded with a moving presentation by Diane Legg and Rich Monopoli, friends and associates of mine as well as co-chairs of the Massachusetts Lung Cancer Alliance. What a day!!

Before I sign off, I would like to say how pleased I was to have people come up and introduce themselves and to say that they read my blog; I am honored. It was also wonderful to be reunited with those I’ve had the pleasure of meeting before; both filming in Meredith and on my trip to the facility in Connecticut. In closing, thank you, Pfizer, for making us feel so welcome and please, keep up all of the good work. You will never know how much it means to our friends, families, and those of us with lung cancer.