Day 28: for my final post devoted to Lung Cancer Awareness in the month of November I am going to talk about my superhero: Dr. Alice Shaw.

Alice and I met under what then felt like sad circumstances. It was the spring of 2009 and I was several months into my snatched from the brink of death fairy tale; aka crizotinib. As far as I was concerned (and I still feel this way), my original oncologist Dr. Tom Lynch walked on water. However, I woke up one morning only to read in the Boston Globe that Tom was leaving MGH to become the head of Yale’s Smilow Cancer Center. I was devastated and sent him a quick message saying I felt like he’d broken up with me via email. In my head I was already thinking I’d have to move closer to New Haven as I viewed my continuing survival to be inextricably linked to Tom Lynch–as an oncologist he was always on the cutting edge, having tested me for an EMLK4-ALK translocation in June of 2008, long before most of the world had even heard of an ALK mutation.

Tom replied quickly and with assurance; he had hand-picked my next oncologist and he was certain I would adore her.

I was at MGH for a long trial day (PF-02341066) when Alice introduced herself to me. We chatted for more than an hour as I had soooo many questions regarding my cancer (she was the lead investigator for PF-1066 as she was for ceritinib, the next agent I would go on trial for). She listened carefully, compassionately and answered with honesty but also great detail. The treasure chest that was my own personal medical information had finally been opened and I was smitten. 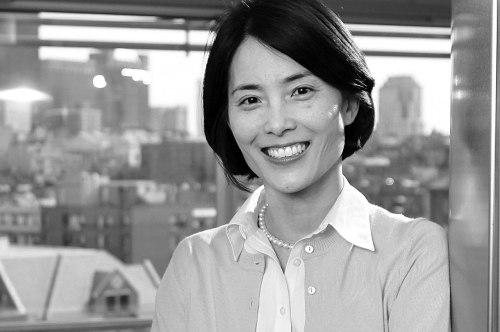 Dr. Alice Shaw (thank you MGH The One Hundred)

So what makes Dr. Alice Shaw so special? I had some fun researching her online in order to write this post and it amused me when I’d run into something I’d written when googling Alice Shaw (I have been rather vocal in my adoration). She was honored as a caregiver at MGH’s The One Hundred celebration in 2012 and at that time I said this: “Alice is an uncommon blend of brilliance and compassion. My relationship with her has greatly advanced my understanding of lung cancer while validating my personal experience–when coping with a serious illness that validation is empowering.”

That’s sort of Alice in a nutshell. Harvard educated (B.A. biochemistry, MD, PHD) she is an associate professor of medicine at her alma mater in addition to being a clinical oncologist at Massachusetts General Hospital. She has been awarded numerous research grants and awards and on November 2nd was appointed as the inaugural incumbent of the Paula J. O’Keefe Endowed Chair in Thoracic Oncology. I was fortunate enough to be in the audience, as was Dr. Thomas Lynch, my original oncologist–he has returned to MGH in the position of Chairman and Chief Executive Officer of the Massachusetts General Physicians Organization. Dr. Jeff Engleman, no slouch himself in this crowd of crowds, gave the introductory speech and noted that Alice is simply the best at everything she does. But that she is also incredibly humble and down to earth and places the utmost importance on patient care–that she is fully invested in securing the best possible outcome for every single person she treats.

When Alice came to the podium that evening, she expressed her gratitude to all those who had supported her. Mentors, colleagues, fellows, research assistants, members of pharma, benefactors, family–including her Husband Stan and two lovely sons who were all in attendance. But she also thanked her patients.

Dr. Alice Shaw is a rising superstar in the field of thoracic cancers. I recently heard her husband Stan make the humorous comment that he knew her before she was famous. The beautiful thing is, the only way in which fame has changed Alice is she’s slightly less accessible due to demand. However, as I noted in my blog about my friend Christian, although he is no longer getting his care at MGH, she still calls to check up on him. Somehow, some way, she finds the time.

In 2012 I had this to say about my oncologist and I wouldn’t change a word today: “Alice is my super-hero. She is contributing to the future of cancer research and treatment. And she is doing her best to make sure I have a future as well.”

I am the lowest common denominator when it comes to instructions/rules/general compliance etc… This post is intended to be part of a blog chain this month (along with my blogs about Christian and Diane) but I failed to list the blogs prior to and following. I shall this time, however!

Yesterday: By Craig Blower about Dave Bjork found at http://craigblower.wordpress.com

Once upon a time

In early spring of 2010, the NY Times asked their online readers a question: “How is life different after cancer?” Those who had been touched by this disease were encouraged to send in a response along with a photo, which became part of an (ongoing) interactive collage. I was an early responder in what turned into an enormously popular feature. Some weeks later, the NY Times promoted this project on the front page of the Health Section and my photo and comments were included.

book, Picture Your Life After Cancer. It shares both the photos and comments from a broad sample of nearly 1500 people who have now participated. I am proud to be among them.

You can see my gap toothed grin in the introduction, along with some comments I submitted as part of an online discussion about this multimedia project and what it meant to those of us impacted by cancer:

And then my original submission, which appears on page seven along with one from Cara Howell of Albuquerque New Mexico. I think they might have matched up our smiles (although she had a better orthodontist or was just born with perfect teeth): And, if you’ve not had enough Linnea yet today, I was asked by Quantia MD to talk about a doctor who had made a significant difference in my life. I chose the two very excellent oncologists I have had; Dr. Tom Lynch and Dr. Alice Shaw. I both idolize and remain forever grateful to each of them. And by the way, it is an audio presentation, which I recorded after my first 24 hours of insomnia. Until I get rolling, my voice is a bit robotic. Very careful enunciation. Have a listen if you like:  http://quantiamd.com/player/yywhviczd?cid=1689