For the record: my contribution to medical research

First, a proposal. All you clinical trial sponsors, listen up. I really feel that upon enrollment in a clinical trial, each participant should be assigned a case manager as a perk of participation.

In reality, it is a necessity.

Take my case as an example. Thirteen going on fourteen years of surviving. A complicated treatment profile that involves surgery, four different chemotherapy regimens, as well as a TKI unrelated to ALK. Participation in three phase I clinical trials added into the mix.

When a protocol for a trial is established, it is viewed as a discrete event. IRB (internal review board) notwithstanding, there is currently no way to take into account individual circumstance. Say, how many clinical trials you’ve been in previously.

Or, do you have a cancer that is histologically different than the other clinical trial participants. Again, myself as an example. My cancer is invasive adenocarcinoma, mucinous, once referred to as mucinous BAC. Although every bit as lethal, it does have a distinct advantage in that it generally stays confined to the lungs–no distant metastases to deal with.

This histology makes me an odd peg when it comes to a one size fits all clinical trial. And it means that I have been subjected to excessive scans that were not clinically indicated and yet were mandated by protocol.

It is already well established that I have mutable cells. When I finally took a tally of all my scans, I became concerned and made a formal request that my scanning schedule be amended. I should add that at this point the schedule bore no resemblance to standard of care, with scans every six weeks. Part of what I was asking for was that scans be moved out to every three months once a participant had been in trial for more than a year. My request was denied.

And that is when I became officially noncompliant–refusing to get anymore abdominal CT scans. Per my insistence, my chest CT scans were also moved to every three months. Eventually, protocol was changed to my original request, with the scanning schedule changing to every three months once a participant had been enrolled for one year and I like to think my noncompliance made a difference.

However, for myself, the collateral damage has been tremendous. I have had a mind boggling number of scans, most of them medically unnecessary. It is infuriating, frightening and sad. Had I a case manager, I like to think this sort of thing would not have happened. At the moment, I am down to a chest CT every three months and brain MRI’s once a year. When you see how many scans I have had, imagine how many more there would be if I had not become noncompliant several years ago.

We’ll start with the small stuff. Keep in mind that this is only tests I’ve had done at MGH. It does not included x-rays (including those at a community hospital where I was diagnosed with lung cancer), scans, MRI’s prior to my time at MGH nor does it take into account dental imaging, colonoscopy or mammograms.

Brain MRI’s are represented by a division sign: ➗ and I have had forty-two brain MRI’s. In case you didn’t catch that, 42. And I have no brain metastases.

And now the really, truly impressive number. Represented by a plus sign ➕ . I have had 91 chest CT’s—plus an additional 10 PET/CT’s of my chest, again represented by the red circle ⭕ . One hundred and one chest CT scans. At least there is some clinical justification here, as I do have cancer in my lungs. However, even given that, had I not spent so much time in clinical trials, there is no way I would have had so many scans.

Oh and this symbol, the radioactive emoji: ☢️ . That’s a stand in for the full body PET scans and Bone Scans I have received. I should add that when I began this trial there was a requirement that a bone scan be given every three months. I told my oncologist that I would drop out of the trial before I’d get a bone scan that often and she contacted the sponsor and in that case the protocol was changed. 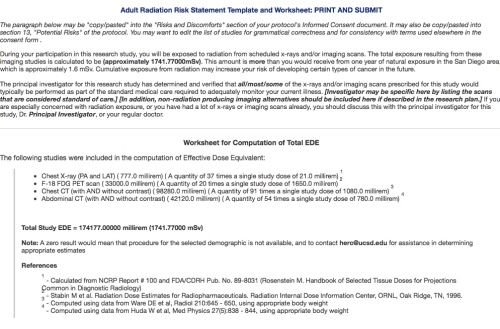 For those who are curious, here is a graphic on the amount of radiation received by survivors of Hiroshima compared to other sources of radiation.

On the balance, there are patients who are underscanned. All of us would rather err on the side of caution. However, I would argue that in my own case, caution was thrown to the wind. As I moved from patient to participant, I lost my autonomy/individuality, as the need for data superseded my own clinical necessity.

There is no justifiable excuse for the fact that I endured 60 abdominal CT scans and 42 brain MRI’s and that as a result of this excessive scanning, I now have a gadolinium deposit in my brain–a finding with unknown clinical significance.

What is known is that no human being should receive as much radiation as I have unless it is absolutely medically necessary. And it is not hard to argue that given my lack of distant mets, those 60 abdominal CT scans and 42 brain MRI’s were not for my benefit.

Nope. I have, in so very many ways, already donated my body to science. And that’s why my gratitude is tempered.

My participation in clinical trials has been a privilege. But also a burden. In forthcoming blogs I shall reiterate my stance that clinical trial participants should be not only recognized for their tremendous contributions to medical research, they should also be offered support in multiple ways. A case worker. And compensation.

2 responses to “For the record: my contribution to medical research”