Time for a mega update. Too-too much so I best break it down into categories.

First (always first), my family. I’ll start with the youngest, Mr. Peter Duff. This kid of ours just finished his second year at MIT, where he is majoring in Environmental Engineering. He has maintained a respectable GPA as well as a relationship; we all ❤ Olivia. Over the summer Peter is working in a lab and also as a counselor at Camp Kesem MIT, the free camp for children who have been impacted by a parent’s diagnosis with cancer.

Next up, August, age 32. My middle son has been living in Colorado for the past sixteen years and for all sorts of selfish reasons, I’ve been urging him to return to the East Coast. Well, his stepfather gets the credit on this one, as he convinced August that his expertise as an extractor in the cannabis field will come in mighty handy now that Massachusetts is rolling out legal weed. Aug and his lovely pooch Lily are temporarily bunking with mom as he gets his business plan up to speed. To say I am thrilled doesn’t begin to approach understatement.

Thirdly, Jemesii, both the eldest and by default, my favorite daughter, remains hard at work on the management end of things at December Thieves–an uber hip boutique on Charles St. For those of you visiting MGH, it is a short walk away and all sorts of fun, even if you merely window shop. Jem is way too busy and I hardly get to see her, but a week ago we grabbed lunch/caught up–always a treat.

Next up—seeing the world. In November I had the opportunity to travel to Peru thru a fellowship with an organization called A Fresh Chapter. For two weeks I 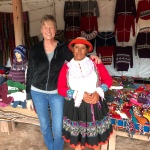 communed with my fellow travelers (cancer survivors all) and volunteered in the local community. I now refer to my life as BP (before Peru) and AP–after Peru. This experience (thank you Terri <3) blew my life apart in a way I never could have imagined. Eyes, heart and mind wide open–I was offered a special window into both another culture and the suffering of others. Already pretty adept at ‘it could be worse’ I came back with a reboot on just how fortunate I have been/am. Life’s not fair and working in a kitchen at a cancer hospital in a poor section of

Lima (no hot water, no toilet paper, no soap) was the most humbling experience of my life. That little kitchen turned out the most phenomenal meals with the meanest of ingredients for both patients and their families, many who would bring a plastic carton so that they could take the leftovers home. I would leave my morning shift exhausted both physically and mentally but also oh so elevated after experiencing some of the best of what the human spirit has to offer.

When I returned home from Peru I hit the ground running, art-wise. I’d had a solo show lined up for almost a year but, true to form, had procrastinated. It all worked out in the end as I spent six obsessive weeks cranking out sixty plus pieces. My friends turned out in force opening night; even flying in from DC (thank you Sally). My sister Bink came from Colorado and surprised me by bringing along my eldest son, August–who hadn’t yet made the decision to move to Massachusetts. It was an exhilarating experience all around, and I owe a big thank you to my friend Marc Mannheimer for making my first solo show (titled Found) possible.

In the midst of this busy-ness, I also plunged into online dating. If you want all the details you’re going to have to buy the book (no, I’m not joking—book is coming). However, suffice it to say that it’s all been a grand adventure. I’ve corresponded with/met many fine individuals and along the way have learned a lot about the human heart (mine and other’s). For the past few months I have been seeing one individual exclusively and last week I was treated to five days  in Montreal as part of the annual jazz fest; one heck of a good date.

And of course I’ve made time for advocacy. A guest blog for Harvard Health, some media opportunities with Harvard Magazine and O Magazine.  Plus travel to DC for a gathering on the hill with my fellow advocates from LAB followed by the annual LUNGevity HOPE summit. I’ve also been engaged with Harvard

Medical School both as a speaker and a member of an initiative through NEER to learn more about exceptional responders. And I was elected Vice President of ALK Positive, a phenomenal group of advocates that maintains an international online support group for ALK+ patients and their caregivers in addition to raising funds for research into the mechanisms of ALK+ disease. Currently partnering with LUNGevity, the ALK Positive group announced three recipients of the new ALK Positive Lung Cancer Transformational Research Award in early June. It is an honor as well as incredibly exciting to be part of this initiative.

I’d be remiss not to mention that all of this has been made possible by the fact that my cancer remains stable—four years and counting. And rumor has it that lorlatinib, the experimental therapy I have been on since late May of 2014, is about to get FDA approval. Woohoo!

ps: My memory is still the devil and I forgot to add a two week trip to Colorado for my annual reunion with childhood friends as well as my niece Shannon’s wedding to Michael Payne. It’s always good to get back to the environs where I spent my childhood and better yet to spend quality time with those I love!

This entry was posted in Uncategorized. Bookmark the permalink.