The downstream effect of two miracles of science

Tom holds a special place in my heart and personal history but sometimes I have to stop and remind him; we both suffer from chemo brain, a subject he recently covered in his column for the The Philadelphia Inquirer.

He was in town briefly last week so we met for lunch and a photo op in front of Miracle of Science in Cambridge. I mean, how could we not. 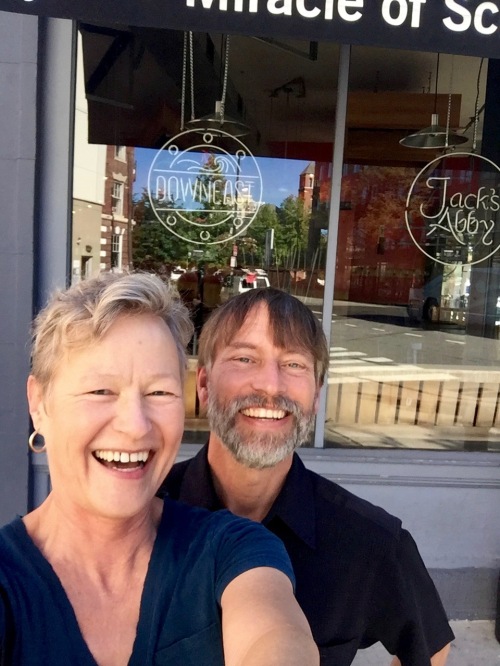 After snapping our selfie we headed down Mass Ave to Flour, one of my favorite little cafes. Lunch banter was about any number of things including Tom’s relatively new role as a writer, and he noted that it makes him feel good to be really making a difference. I just looked at him incredulously before exclaiming “Dude!”

At this point I should remind you that Tom codeveloped LDK-378, the second ALK inhibitor I was on trial for. Also known as ceritinib and now marketed as Zykadia.

I then used my finger to draw an imaginary line on the table. “This” I said, “is my lifeline. And this is where I started taking ceritinib. No ceritinib and my lifeline stops right there.” And then, for further emphasis: “I am alive because of you and don’t think I ever forget that, even for a moment.”

By this point I was getting a little weepy. I went on to say that if Tom were a war hero rather than a scientist who developed a lifesaving drug for a pharmaceutical company, than his role would not be so seemingly anonymous and that he would be celebrated. But that the lack of accolades in no way diminished what he had already accomplished, which was to extend the lives of so very many ALK positive cancer patients. Including yours truly. And that I was grateful to the moon and back.

Such a tight connection between the individuals who come up with these drugs and those of us who take them. A lot of cause and effect going on there and to think that Tom and I would have the opportunity to also develop a human connection is just way, way cool. This guy had my back long before he ever met me (but must of known of my existence as an ALK+ individual). Gotta say I’ve got his back now but sometimes that just feels like hanging onto contrails as he’s jetting around with astounding energy and putting his fine intellect and experience to work as an advocate/activist for patients with advanced cancers. I feel both honored and blessed (and damn fortunate) to have him in my life.

Which leads me to this closing thought: maybe we should nave a national hug a medical researcher day. Followed by a bunch of bang up fundraising.

10 responses to “The downstream effect of two miracles of science”