LUNG FORCE: I’ve been on a whirlwind of advocacy and it all started with a quick trip to DC with LUNG FORCE and the American Lung Association. Advocates from all fifty states were pulled together to lobby Congress to sign on to a proposed bill increasing funding to the NIH. It was a heady if all too fast experience with a surprise appearance by Miss Patti Labelle (who sang Somewhere Over the Rainbow–my favorite ever song), as well as some inspiring comments about where cancer research is heading from Dr. Francis Collins, the director of the NIH. In addition we heard from Congresswoman Nita Lowey and Senator Dick Durbin, Dr. Johnathan R. Whetstine, Harold Wimmer (CEO of the ALA) and myself—adding the patient perspective. As always, it was great to catch up with some of my lung cancer peeps and to make some new friends as well. 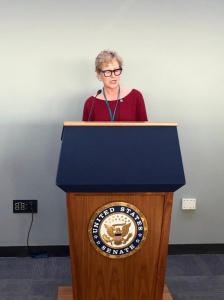 Me and Miss Patti Labelle

The panel for Cancer 101

The patient has a seat at the table: representing

AACR SSP: I found out about the AACR’s Survivor Scientist Program by chance—two days before applications were due. My friend and fellow advocate Janet Freeman (who I learned had also applied) was a trooper and at my last minute request, wrote a letter of recommendation for me.

To say I had technical difficulties from the get go is an understatement. Unable to download their application form and with no time to figure out a way around my issue, I sent in what could only be described as cut and paste. And crossed my fingers.

Weeks went by and Janet learned she had been accepted to the program but I heard nothing. Oh well—Janet would be an excellent representative for lung cancer and I figured I could apply the following year.

And then I got a phone call from a lovely woman named Karen Mills, wondering why I had not responded to the notification that I had been accepted. Long story short, it was right around this time that I became aware that quite a few of the emails I was sending out had not been answered. At first I figured it was me, that nobody liked me anymore (sure, why not). But finally I realized that it was related to my email account having been hacked. My super smart former son-in-law Jamie explained that the hackers could be selectively intercepting some of my inbox. Turns out these wiley hackers had opened another account using my name: linnea.1111@hotmail.com. NOT ME, and yet much of my mail was/is being sent to that account. It is a big hot mess that I am still trying to untangle.

But back to the SSP—I was in!

Truth is, I had no idea WHAT I was in for. The SSP takes advocacy to a whole other level and I will not be able to convey everything I took away from these few days in one post.

Held in New Orleans as part of the annual AACR (American Association of Clinical Researcher’s) convention, it was like boot camp for advocates interested in learning more (much more) about the science and policy behind cancer research. Lots of rock stars of the cancer world here, and Vice President Joe Biden shared remarks about his Cancer Moonshot at the closing event (which sadly I missed—due to an early morning flight).

Over the coming weeks I will tell you more about what I learned while in attendance (one of the mandates of participation—that you share information gleaned there with your community).

NCCR:  Next up was a congressional briefing pertaining to the National Cancer Moonshot Initiative. I again provided the patient perspective alongside a very distinguished panel (see image above). And I was positively touched that my son August’s childhood friend Jonathan Soohoo was in attendance along with my dear friend Sally. Absolutely exhilarating. Next up: Lungevity’s National Hope Summit!

This entry was posted in Advocacy and tagged cancer advocacy, lung cancer. Bookmark the permalink.