But I know more details would be helpful… 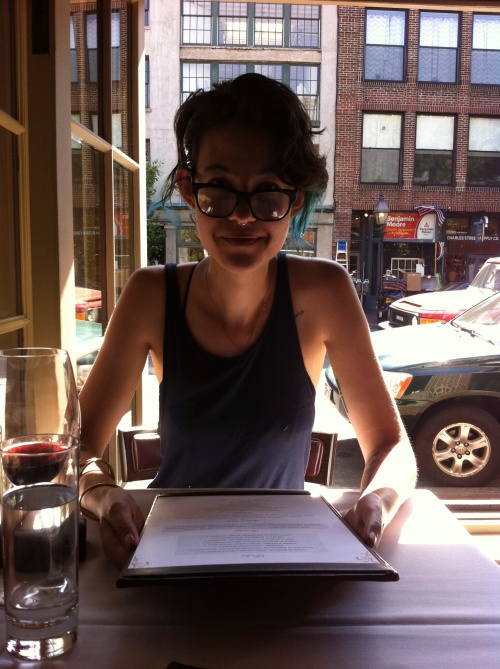 My beautiful daughter on a particularly fateful day.

Is there some fresh way of saying ‘It’s been a challenging time?”

No, probably not. And besides, challenging is a euphemism; a gentled version of what I wish to convey.

It’s been a difficult year, and the year before that as well. Adjusting to life alone, the continued progression of my lung cancer, a short stint on Xalkori, and then at long last admittance to the PF-06463922 trial. But it has not been without wonder.

I went in with low expectations, as my second secondary acquired mutation (G1202R) is highly resistant to all ALK inhibitors, although results in the lab indicated that my cancer could still respond at higher doses. I entered in the third cohort, at a dose of 75 mg. I was delighted when my cough began to abate almost immediately. But then four days after regular dosing started, I began to experience marked shortness of breath and the sensation that something was caught in my windpipe. I was coughing a lot and some of it was streaked with blood. The following morning there was a small clot of blood in my sputum, but my shortness of breath had abated. However, upon awakening the next day I coughed up yet another small clot. Hemoptysis is one of those things you just can’t ignore, so I sent a text message to Dr. Shaw, who was away at ASCO.

While waiting for a response, I received the phone call from my stepfather Jim telling me that my mother had passed away.

And that phone call was followed by one from a member of the clinical trial team, telling me that I’d been scheduled for an urgent CT scan, in order to rule out a blood clot or pulmonary embolism.

Fortunately my daughter Jemesii had the day off and pretty much insisted on meeting me at the hospital. I was going on adrenalin at this point and don’t know what I would have done without her. In prep I blew two IV’s for contrast (these veins are getting tired) and ended up having a vasovagal response (never happens to me) so I earned some time out in the recliner with some intravenous saline. And then after the scan wrapped up Jemesii and I headed over to the Termeer Center for the results.

And this is when things got really weird. The attending physician said I had neither an embolism or a clot. “How about cancer?” I asked. “Is that all gone?”

“Well, no…but…” she said, and then read from the report:

Lungs and Airways: Status post left lower lobectomy. A mixed
attenuation lesion in the lower portion of the remaining left upper
lung is significantly smaller than on the prior exam now measuring 2
cm x 1 cm x 3.2 cm significantly smaller than on the prior exam where
it measured approximately 8 x 7 cm in diameter. A small right upper
lobe mixed attenuation lesion (series 4, image 330) measures 6 x 7 mm
minimally decreased from prior measurement of 7 x 9 mm. 4 mm region
in the left upper lobe seen on series 4, image 339 is not
significantly changed. A nodule in the right upper lobe seen on
current examination (series 4, image 314) and on prior examination
on 66, image 155 now measures 4 mm in diameter down from 6 mm. And
unchanged region of atelectasis is present in the left upper lung
near the left hemidiaphragm. Additional nodules. Similar in size to
prior exam. No new nodules are seen. There is no evidence of new
pneumonia or pulmonary edema.

I had begun regular dosing six days prior and an 8 x 7 cm chunk of tumor had melted away to a mere shadow of itself. It was just unbelievable.

Stunned, Jemesii and I decided that a good meal and an even better glass of wine was in order. We raised a toast in honor of my mom. And then we raised another to the future.

85 responses to “But I know more details would be helpful…”