Yesterday was a humdinger. Two treatment-related mistakes in, I realized that not only am I over-overwhelmed, it’s time to do the big ask: Help!

Shortly after after posting my previous blog (and following much back and forth), Dr. Shaw and I decided that canceling my mediation was not a good idea. The prospect of getting three lawyers to readjust their schedules just felt too daunting. And, until we reach a settlement, I am still completely dependent upon David financially and that is not where I want to be.

Alice (Dr. Shaw) very kindly opined that medically it would be okay to wait a week. I emailed back that I would then delay wash-out and continue taking my Xalkori for one more week. This was her adorable response:

Well, evidently I overdid it by one pill, and because of that the trial start date could be delayed (really?). That was mistake number one. The second screw-up was getting confused as to the time of a scheduled MRI and arriving fifty minutes late. They graciously squeezed me in but it easily could have meant another trip/potential delay.

So let me describe my little day from hell. I was up at 6:30 am with the intention of getting on the road by 7:30 for a 9:30 am dermatology appointment. A mere 24 hours earlier I had been looking at my left shin with my glasses on. I have very long legs and increasingly poor eyesight and if my glasses aren’t on, anything below the knees is blurry. Well, there’s a mole mid-shin that a dermatologist at MGH has been watching, and what I saw when I looked closely was concerning—particularly the numerous small black spots that now peppered the surface of this little ‘beauty spot’. I had a basal cell cancer removed at the age of thirty and my father Ollie had numerous basal and squamous cell cancers as well as melanoma. My chart must have me ID’d as high risk, because when I called for an appointment they marked it urgent and got me in yesterday.

Anyway, that’s the back story. I got on the road by 7:45 and realized I had missed Peter’s 7:20 wake-up call. Placed that–we’re getting this routine down, and as silly as it may seem, I love speaking to him briefly each day. And then I settled into what is always a horrific commute. What can take half an hour turned into and hour and a half. I got to dermatology just before my appointment. Fifty minutes and five magazines later I asked the receptionist if I’d be seen soon—as I had more appointments over at Yawkey starting at 11 am. Oh dear. Seems she forgot to let them know I was there…she was very apologetic and I was seen shortly thereafter but it was some additional stress I could have done without.

Anyway, one look at the mole and the dermatologist said ‘biopsy it’. His feeling was that it represented a basal cell, but given the pigmentation and appearance, melanoma could not be ruled out until the pathology report came back.

I had a punch biopsy performed and I will hear the result in seven to ten days. As the doctor said (a wee bit too glibly, I felt). ‘You don’t want to hear back from me.’ If a nurse calls, I will know it is reassuring news. If it’s the doctor, do you think hanging up would make it go away?

I had to practically run back to the Yawkey building (a challenge at this point) as an Echocardiogram was scheduled for 11 am. I was ten minutes late and breathless to boot, but the test proceeded anyway. Evidently I shall have these periodically during the upcoming trial, as there have been some (asymptomatic) reports of prolonged QT interval.

After that, it was labs and an EKG on Yawkey 7B. I spoke to the trial nurse and my scheduler, and ended up with just enough time for lunch before I had to begin fasting for my pre-trial abdominal CT scan. I enjoyed my rushed meal but for dessert I had a brain fart—thinking I had time to sit in the MGH cafe and browse on my laptop before heading over to Chelsea where the scans were scheduled. Oops. At 3:20 I realized my brain MRI was supposed to occur at 3:15. I placed an apologetic phone call and did my best to rush over—something that is impossible at that time of day. Forty five minutes later I arrived at Imaging in Chelsea and (because sometimes you do what you have to do), drank one of those hideous barium shakes. I did beg off the second one.

Well, it looked as if my MRI would need to be rescheduled, but bless their hearts, they squeezed me in. It was almost 7 pm when I left. Exhausted.

So here’s the ask. I’m an independent sort by nature and a good deal of my journey with cancer has been rather solitary. Sometimes that has sucked but mostly I have managed (got my own back sort of thing). However, I confess to harboring a small amount of envy for those cancer patients who have a lot of support. Medically I’ve got the best squad a girl could ask for but I’m thinking I could use a little…Team Linnea. Family/friends/folks who might be willing to go to appointments with me. I’ve got some long ones coming up as I start the trial and it is always easier with company.

As soon as it is finalized, I am going to publish my schedule. If you’d like to spend a day in the life of a patient in a phase I clinical trial, don’t be shy! All comers welcome!

And while you’re at it, please cross your fingers that the skin biopsy comes back benign (best) or basal cell (better than the alternative). I don’t need any more wrenches thrown into this affair. My son August sent me this e-card, which nicely sums up my current sentiment: 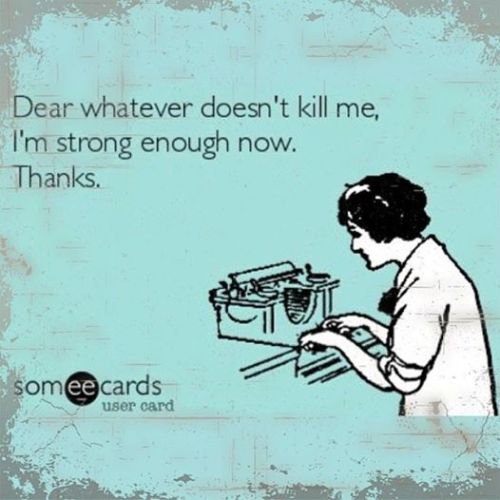 47 responses to “Loud uncle paired with a quiet whine”