Okay, so what else? First, a two day sleep-over at Melinda and Kihan’s house; a mix of business (as it were) and pleasure. I’ve got a painful varicose vein on my right leg and saline injections ten years ago followed by six months of support hose were ultimately unsuccessful. Now that I’m taking a break from treatment, it’s a convenient time to go after the vein again. Kihan is a surgeon and will be performing the procedures (laser and then removal), so I scheduled an ultrasound and consultation with Dr. Lee but was also squeezed in a good time. In a couple of weeks, the vein will be history. 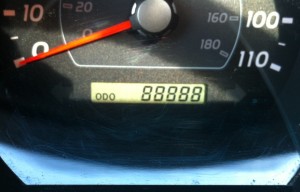 On August 8th David and I marked our 21st wedding anniversary. We drove to Portland, Maine for dinner at Hugos. I slept on the way, lulled by motion and the warm car (no, I wasn’t driving). A clap of thunder startled me awake; the sun was shining and I’d been dreaming. David pointed to the odometer:  in a few more miles it would hit 88888. Remember, this was happening on 8/8/13. It all felt rather auspicious, and we took an earlier exit so that David could snap a photo. Dinner was delicious.

I also had my six month mammogram; the calcifications in my right breast require no immediate action but warrant a revisit in another six months. Afterward, I drove to Gloucester for a visit with my friend Laurie Geary. Laurie also has stage IV lung cancer, but it’s hardly slowed her down—we spent the afternoon sailing. I am somewhat directionally impaired (as in, have trouble following directions), and generally find a sailboat a highly stressful environment. However, Laurie is a gentle captain, the day was beautiful, and we couldn’t have had a better time. I left with a copy of Laurie’s recently published book, Dancing Through Cancer. Laurie also has a blog of the same name, where you can catch up on all of her adventures.

The view from Laurie’s back door

Two days later I was back in Boston for the monthly PFAC meeting and what I have come to see as a social event, an appointment with my thoracic social worker. And the week after that, I checked in with Dr. Shaw. We’re accustomed to seeing a good deal more of each other and I’d really missed her. However, I also stressed how much I have enjoyed this break and that I have been feeling really, really well. I also had to acknowledge that my cough is making a comeback and so we agreed to bump up my next CT scan—I’ll report to radiology in three days.

Next installment:  one big party!

This entry was posted in Uncategorized and tagged Dancing Through Cancer, Laurie Geary, stage IV lung cancer. Bookmark the permalink.

10 responses to “More wrapping up August”