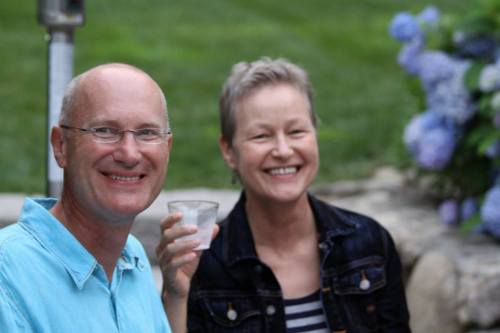 Time flies—an entire week has gone by since David and I attended Dave and Diane Legg’s Live It Up LUNGstrong fundraiser. A combination party/silent auction, this mega party is an annual event to raise awareness and money for lung cancer research.

Diagnosed with cancer more than eight years ago, Diane Legg immediately poured her almost endless energy into advocacy, including many years as co-chair of the New England Chapter of The Lung Cancer Alliance. Diane was featured in an article in The Boston Globe not long after my own diagnosis and I decided to call her. Although we talked on the phone several times, a few more years passed before we crossed paths; now we are close friends. My admiration for her is boundless—as is my gratitude for all the work she and her family do on behalf of all of us with lung cancer.

In addition to advocacy, Diane is committed to pushing herself to incredible physical distances, and this year she will be riding in a leg of the Pan Mass Challenge for the second time. Keep in mind that she has stage IV lung cancer.

But back to the party:  Live it Up LUNGSTRONG was both fun and incredibly meaningful. A plethora of delicious bite sized delicacies, prepared by a loyal cadre of volunteers and served by Amesbury students. Wonderful music, a cash bar and a rousing speech by Diane herself, as well as her two oncologists, Dr. Jeffrey Engleman of MGH and Dr. Pasi Jänne of Dana Farber. And then Diane asked the lung cancer survivors in the crowd to come forward. Arms around each other’s shoulders, we joined together for one powerful group hug.

In Diane’s own words, more about her upcoming ride:

Once again both Dave & I committed to raising money for cancer research at the Dana Farber Cancer Institute (DFCI) by riding in the 2013 Pan Mass Challenge (PMC), an annual bike-a-thon across Massachusetts. The PMC channels 100% of every rider-raised dollar directly to Dana Farber Cancer Institute. It’s the most successful fundraising event for charity in the nation, and also among the leanest. It’s one of the reasons that we ride and support the mission. We also ride because as you may know…I am living with Stage IV lung cancer; I’m a rare 8 year fighter, so this is also personal.

On the first weekend of August we will join more than 5,400 cyclists; Dave will be riding in his 5th PMC and I will be riding in my 2nd. Although the PMC is actually a 2 day ride, Dave adds a third day to the start of the trip and will be riding from the NY/MA border to Sturbridge on Friday. In total, Dave, along with a few of our fellow LUNGSTRONG teammates will be riding 300 miles! This year the Friday ride, which is organized by Brielle’s Brigade, will be extra special and bittersweet, sadly Brielle lost her battle with cancer shortly after last year’s PMC, she was just 13 years old.

I will be riding in my 2nd PMC and will be attempting to ride the 2-day route which goes from Wellesley to Provincetown. (Last year I rode one day and 84 miles.) This route is 164 miles. As hard as this ride is for me, both physically and emotionally, I ride because I can. Most Stage IV cancer patients can’t.
Many of you have generously supported us year after year and for that we are extremely grateful. 100% of the money that Team LUNGstrong raises goes towards Lung Cancer Research at DFCI, under the direction of Dr. Bruce Johnson. Dana Farber has been leading the way in lung cancer research and we hope that someday soon they will be able find a cure.

Although I have advanced lung cancer, aside from my initial surgery and adjunct chemo in 2004 – 2005, I have not been in therapy. The reason I have not started treatment is that the treatments today are not cures and only work for a limited time. I have been holding out in the hopes that better therapies will be found and developed. I am fortunate that the cancer is slow growing and not overly aggressive; this can change in the blink of an eye. In the meantime, I am living a very full & rich life. I feel extremely blessed to be able to ride with Dave and the rest of Team LUNGSTRONG in the PMC.

We have witnessed many friends battle this disease. A disease, quite frankly, that gets far too little attention and continues to be stigmatized. We want to be a part of changing the stigma and to reverse the statistics! Today only 16% of the people diagnosed with lung cancer live more than 5 years. It is the leading cause of cancer deaths, killing more people than breast, colon, pancreatic and prostrate combined! This year alone, more than 240,000 people will be diagnosed with lung cancer and over 160,000 people will die from the disease.

As I mentioned, DFCI is a leader in innovative lung cancer research and is working diligently to find a cure. There has been more progress in lung cancer research in the past 5 years than there has been in the last 30 years. We are blessed to live so close to Boston and to have this kind of care accessible to us. We are excited to be part of a team that will continue to support this critical work, giving us the hope that we need.

If you are interested in supporting Diane and David Legg or any of their other teammates for the 2013 Pan Mass Challenge, please follow this link: Team LUNGSTRONG.