And now some words from my friends: Lisa

In recognition of November as the designated month for lung cancer awareness, I asked members of my online support group INSPIRE if they would be willing to share their personal stories. First up is a post written by my friend Lisa, who was misdiagnosed with a number of garden variety ailments before learning that she had lung cancer. Sadly, a delayed diagnosis is all too common, and the suggestion that her symptoms may have been psychosomatic in origin mirrors my own experience prior to diagnosis.

Lisa also addresses the issue of stigma, from the perspective of someone who was an occasional, or social smoker. Her description of feeling less deserving of care is heartbreaking. Please welcome Lisa: 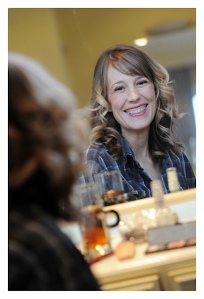 “I’m a 37 year old woman, married, no children (but two very spoiled cats!). I live in the UK but am Canadian. Was diagnosed November 2011 with Stage IV adenocarcinoma with extensive mets to the bones, brain and liver. I was an Assistant Professor in International Relations at a university in the UK and became alerted to the ‘problem’ initially in Fall/Winter 2010-11 through having shortness of breath/ wheezing/cough which was wrongly diagnosed as asthma. I blamed the cat, had the carpets cleaned and went on with my regular routine of biking to work, doing ashtanga yoga, hiking on weekends and working too hard.

Over the course of that Spring (2011), I also was referred to a physiotherapist for shoulder and arm pain. In June, I started experiencing what are called ‘visual migraines’ – where your vision fractures and shimmers and swirls for about half an hour – and was losing the ability to read text. I was also experiencing photo-phobia – where bright lights hurt your eyes. By September, I had become so sick that I had to go off work, having been diagnosed with ‘depression’ and ‘anxiety’ and having been put on anti-depressants. Still, despite my pleas, and a dramatic weight loss, none of my doctors (and I saw three different family practitioners) would consider my symptoms in conjunction with one another – insisting that they were all common, unrelated problems (migraines, asthma, depression, back pain).When in November, I completely misread my asthma prescription and took 10 times the recommended amount only to have it make no difference to my violent cough, the doctor finally sent me for a routine X-ray. I was called back within hours. Cancer. And so it begins….

There are three points that I would like to make:

1. That it is a sneaky, cruel, insidious disease. Looking back, it was clear that I was getting sicker and sicker and had been for about 14 months prior to my diagnosis. But at the time, it is so easy to just dismiss a cough, a wheeze, feeling a little tired and to continue with your regular routine. Because it happens so slowly, it is easy to miss the weight loss, the lack of appetite, or the excuses that you start to make for taking the elevator instead of the stairs.

2. I can’t prove it, and this is just my opinion, but I have no doubt in my own mind that my misdiagnosis was in large part due to the fact that I was a middle aged female and that my male doctors were preconceived towards a psychological rather than a physiological diagnosis. It is so easy to say that someone’s symptoms are ‘anxiety’ related if they are a little bit complicated, unclear or unusual. Don’t repeat my mistakes. You know when something is wrong. Find another doctor that you connect with and who takes your concerns seriously. Get referrals. Get tested. Refuse to be dismissed.

3. The elephant in the room: smoking. I didn’t do it a lot but I did do it: socially, at parties, doing research interviews if it made my interviewees feel more comfortable. I think that I thought that because I only did it a little, or because I was healthy in other areas of my life – that it wouldn’t matter. And although my doctors insist that the amount that I smoked was incidental to my diagnosis, I tend to disagree. Cancer acts very differently in different people and while some of us can get away with smoking a pack a day and live until we’re ninety, I think that for some of us, all it takes to contract LC is a couple of cigs a week.What is also notable – but hardly surprising – about the general discourse is how there is still an implicit emphasis on non-smokers being more deserving of a cure. (This could be my own insecurity, but every-time I come up negative for a new test that is more common in never smokers (EGFR, ALK), I feel that somehow I have failed at my cancer; that it’s because I am less deserving of a cure.) So, on top of all the other bullsh*t that cancer throws at you, LC has the added sweeteners of blame and guilt. This in turn, acts as a silencer for those of us, who, had we not smoked, might feel more entitled to have a voice in the debate. Instead of speaking up – screaming (or wheezing ☺) for a cure for this woefully underfunded disease – and taking the tobacco companies and other environmental polluters to task for their actions, we focus on our own guilt and quietly accept our ‘punishment’.

As a way of forcing myself beyond my guilt (and having been inspired by Linnea’s amazing blog!) I have started chronicling my own experiences here: stageV.net