Farewell to the tiniest 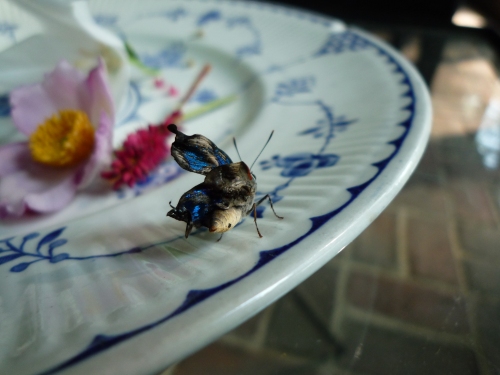 After dinner Peter and I buried the butterfly; a small grave scooped out with a spoon beneath the butterfly bush. For the past five weeks, I’d continued to replace the wilted flowers with fresh and fill the bottle cap daily with sugar water. Conflicted about keeping the butterfly captive but knowing that it would not survive if freed, I’d shift the makeshift container to the screened in porch so that it could feel the breeze and warm in the sun.

Slowly its once gaudy wings grew drab as the blue scales rubbed away. Initially quite active, it now spent most of the day clinging to the ribs of the overturned salad spinner. Yesterday morning I spotted it atop a spray of goldenrod. By late afternoon it was back on the bottom of the enclosure, listing to one side and twitching almost imperceptibly. Its time had come to an end.

The grief I feel is totally out of proportion, as outsize as the spirit this little insect seemed to possess. The longer it lived, the more unreasonably attached I had become. I didn’t just anthropomorphize, I practically mythologized.

Crazy, I know. Immoderate to the extreme. I have always admired insects, although never given a second thought to quickly dispatching the blood sucking varieties. And now, one little battered butterfly, through no design of its own, had stolen my affections.

When we care about something, it takes on more value. Sometimes we attach both meaning and great significance to that which we are invested in. These are human constructs, and represent both the best and worst of our species. It is good to care, but absurd to make it all personal, and more foolish still to think that we can exercise control.

By nursing a tiny butterfly, I, for the briefest of times, played puppet master. I experienced the feeling of power that comes with keeping another alive. And in turn, I felt the devastation when my best intentions were no longer enough.

Invariably (and yes, mine is a secular viewpoint), despite all our tinkering and interventions, nature will run its course; life will give way to death. This, I understand. But what my head says, my heart doesn’t want to hear.

This entry was posted in Death and dying and tagged anthropomorphizing, attachment. Bookmark the permalink.

14 responses to “Farewell to the tiniest”