Since its inception in 1980, the annual Pan-Mass Challenge has been raising funds for cancer research and treatment at the Dana Farber Cancer Institute in Boston. A giant bike-a-thon-love-fest, the Pan-Mass draws thousands of riders from across the country, each of whom commit to meeting (and often exceeding) a minimum pledge based on the chosen route and distance that they will ride. 100% of the money raised by riders goes to the Jimmy Fund, and then in turn, to Dana Farber.

Sometimes the riders themselves are cancer 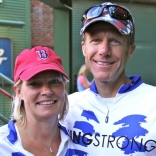 survivors. This year, (today–8/4/12) my friend Diane Legg, who shares my preference for the term surviving cancer; will be amongst them. I became acquainted with Diane shortly after my own diagnosis when an article about her fight with lung cancer was featured in the Boston Globe. I contacted her and we have, in one way or another, been partners on this journey ever since.

Diane’s diagnosis propelled her directly into advocacy, and she is cochair of the New England Chapter of the Lung Cancer Alliance as well as director of LUNGstrong Inc, the team that Diane will, along with her husband David, be riding for.  A commercial featuring Diane:

And for a more in depth look, check out this interview with Diane by Heather Unruh of Channel 5, or Diane’s PMC page.

In a word, amazing.