Fifteen years ago today I gave birth to a 10 lb 4 oz baby boy; our youngest, Peter Albion Duff. It was not an easy birth, for mother or child. His older sister and brother had each weighed a mere 6 pounds and some change, and I’d been able to employ lamaze breathing techniques for drug free, natural deliveries. I really tried to follow suit with Pete’s birth, but after far too many hours of labor, the attending physician suggested an epidural. The anesthesiologist, named Dr. Zipper (really), instantly became my favorite person of all time. Half an hour later, Peter emerged, or rather, was yanked free, to a chorus of “oh my god, he’s huge!” Aside from a temporarily misshapen head (which measured an astounding 15 and 1/2 inches in circumference), Pete was perfect. And I recovered. 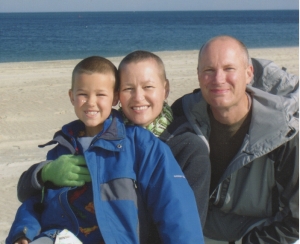 Seven years ago, on Pete’s eighth birthday, I was in house at MGH following a lobectomy. When his dad brought him to visit me in the hospital, Peter crawled into my bed and just sort of made these small animal sounds. It broke my heart, but also reinforced the fact that not surviving wasn’t an option. Our Christmas card that year was a photo of David, Peter and myself at the beach. I am about two months post chemo and we all have the same haircut.

So, another milestone. Pete is excited that he is six months away from qualifying for a learner’s permit to drive (oy vey). I am thrilled just to be present; to have the chance to witness my (big) little boy well on the way to becoming the wonderful grown-up he will become.

This entry was posted in Milestones and tagged personal milestones after cancer diagnosis. Bookmark the permalink.