The boys have both had nasty chest infections this week and so I have taken advantage of the temporary two address status by sequestering myself in the new house. Some patio furniture, one small table and a mattress on the floor. I’m set! Oh yeah, and a television. Night before last I watched Dancing With the Stars. Quite honestly, it felt like a waste of time, but hey, that was the point. I have been luxuriating in a brief respite from all that is pressing; including (somewhat regrettably) writing a blog. Instead, I’ve mopped floors, put things away in cupboards, lain in the sun by the pool (not yet unwrapped, but yes, we have a pool!), made a few changes to the lovely gardens, and sipped martinis with dinner three nights in a row (a treat, not a trend).

I think I’m in love with this house. Which is a good thing. And I also believe I’m feeling a whole lot sunnier in general. Also good.

But my little break has gone on long enough. First, a blog and then back to Blueberry Hill for some more packing and painting.

But I haven’t finished telling you about Colorado. The supine feline on the left is Lucky, my niece Zola’s cat. The foggy image in the mirror could be considered another accidental self portrait.

Lucky’s posture pretty much sums up the way I felt spending time with family. I’ve already mentioned how great it was to be with August, but it was beyond wonderful to spend time with Bink, Greg, Mesa and Zola as well. When I was growing up, my little sister Bink was sort of a constant present in my life and I really miss being able to just hang out and do sisterly things. My brother in law is a ton of fun and my nieces are just some of the best girls ever. Watching them play soccer, going to a school projects presentation, playing hooky (them, not me) and going out to breakfast:  it was just splendid.

I also got to share Easter dinner with Greg’s parents Bud and Judy, and that was a pleasure. My brother John and his girlfriend Amanda stopped in to say a quick hello, and then on my last morning in Colorado, John gave me a ride to the airport and as my flight was delayed, we enjoyed breakfast together.

And Claire. My dear friend Claire, who has been there for so many seminal moments in my life and yet from whom I have been geographically distant for far too long. We spent a little over a blissful hour together, joined by her husband and my friend, Andre. When I left, I was carrying one of Claire’s beautiful paintings under my arm:  it was hanging on her wall, I fell in love with it, she told me she had painted it, and that I should take it with me. Just like that. Time to get busy on one in exchange (I love trades). 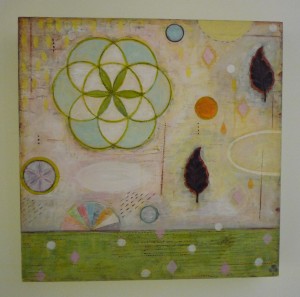 And then it was time for the primary reason for my trip to Colorado. I was an attendee at the Lung Cancer Advocacy Summit sponsored by the National Lung Cancer Partnership.

The conference, simply put, blew my mind. The educational component began with the science of lung cancer, and included a field trip to the lung cancer research laboratories at the University of Colorado. We were able to view lung cancer cells beneath a microscope and to see actual images of FISH analysis of genetic mutations (including EML4-ALK). It was all incredibly reassuring to know that these bright minds were hard at work on the study of lung cancer.

Subsequent days were spent discussing the stigma associated with our disease, which was compared to the bias that those with HIV suffer; a very interesting parallel. We also learned a bit about the legislative process and discussed engaging the media and raising funding for lung cancer. And, of course, we all traded stories and bonded in that peculiarly strong and immediate way that people do when they are in the midst of a disaster. Everyone present at that conference has been impacted one way or the other by lung cancer, whether as a caregiver, survivor,  family member or close friend who has lost someone to the disease.

To say the summit was life changing is an understatement, and I thank and commend the National Lung Cancer Partnership for putting together an incredibly well organized and informative weekend. And for allowing me to attend 🙂

And so what else?

Well, on the last night of the conference I snuck off for dinner with an old boyfriend whom I’d not seen for twenty four years and who now lives in Denver. Fritz, his partner Amy and I spent a lovely few hours together. They make a great couple and it was good to see my old friend so happy. Hopefully we won’t let a quarter of a century go by again before we sup again.

On the final morning I awoke quite early and slipped down to the hotel restaurant for breakfast a little past six. Three of the booths had occupants and the man in the booth closest to the entrance looked an awful lot like my little brother Daniel. My heart dropped to my stomach when I realized he was  my brother Daniel. I called out his name and cried, laughed and hugged him simultaneously.

Daniel was every bit as shocked as I, and I asked if I could join him for breakfast. Unfortunately he was just leaving (he is a steward for an airline), but he suggested that I walk out with him and he would introduce me to his wife.

Now for a little background. I am the oldest of seven siblings; Daniel is second to youngest. He lives in Alaska and I live in New Hampshire. For reasons that I don’t entirely understand, Daniel has estranged himself from most of our family. I hadn’t seen him for almost four years. And here we were, in a hotel restaurant in Denver, Colorado, at exactly the same place and same time for a few moments. If that’s not magical I’m not sure what is. And just to prove to my family (and myself!) that this had had really happened, I asked a friend of Daniel’s to take a photo of the three of us: 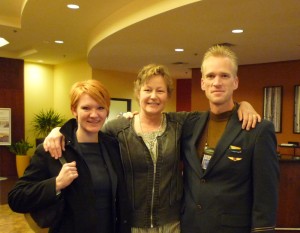 And, of course, I hope running into Daniel is both a sign and a trend. I miss my little brother.

When the conference broke up at noon many emotional farewells were made, and then my youngest sibling, Rosalie picked me up to take me back for a night to her home in Boulder. She is pregnant with her first child and together with her husband Brian, we had a too brief but oh so wonderful reunion as well. To have actually seen four of my brothers and sisters in one week was such a treat.

And then, it was time to go home. And here I am.

This entry was posted in Advocacy, Living with lung cancer and tagged NLCP advocacy summit 2011. Bookmark the permalink.