And it just keeps coming down

Snow. Lots and lots; seven to eleven inches today, more tonight and in the days to follow. Those warm days were just a teaser. 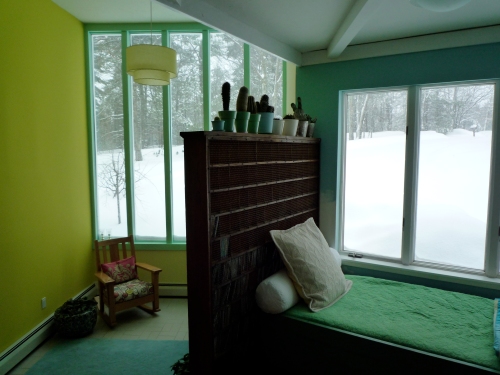 It’s been a busy week. Our good friend Frank was here last weekend with his son James and on Saturday they hit the slopes with David and Peter.

On Sunday it was bitter cold outside, and the guys opted for sledding in the backyard instead. Frank and James were able to stay until Monday morning and it was great to see them both.

Tuesday morning was my monthly appointment at MGH; all routine. It was agreed that even though I wasn’t schedule for a scan for another seven weeks, I would come in for a physical every four weeks. Alice (Dr. Shaw) just felt better that way, and I’m not inclined to disagree with her.

Afterward I joined my friend Sadie and her Husband Pete at the condo they just moved into on the edge of a salt marsh. The three of us enjoyed dinner and conversation together and I slept over; a lovely respite.

Yesterday was filled with errandsw in anticipation of the forecasted snowfall. And then last night, quite suddenly, I was feeling like crap again. Back pain, muscle aches, headache and general flu-like symptoms. After dinner I took some Advil and went straight to bed. This morning I felt a little better but my face was swollen and my head and sinuses hurt.

I began to wonder if my symptoms might be due to the Levaquin, which I had been on for a week and a half. The last time I took it, after ten days my face swelled up as well. After googling side effects, I’m pretty convinced that is the case. Troublesome, as I am resistant to most antibiotics now, and I feel backed into a corner with the recurring sinusitis.

I’ve just got to do what I can to strengthen my natural defenses and frankly, to hold out for spring. It will be a breath of fresh air indeed.

8 responses to “And it just keeps coming down”