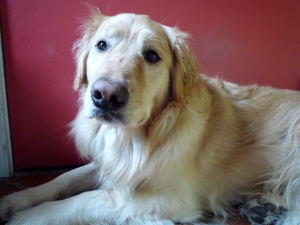 We are coming up fast on the thanksgiving holiday; in two days Jemesii (who turned 26 yesterday!), Peter and I will be joining David in Marfa. I’ve got a list a mile long of things to be accomplished in the next 48 hours and I will be satisfied if I check off 80% of them.

On Monday I was jotting down appointments in my datebook and eating lunch. I called the vet to schedule some overdue booster shots for Buddy. There was soothing viola de gamba music in the background punctuated by bursts from an electric hammer in the next room where good friend/hired handyman Dave (not my husband–one of the many Daves in my life) was building a bookcase. Buddy was lying next to me on the floor when suddenly he tried to stand and his hind legs gave out.

Buddy has hip dysplasia, so I assumed that was the issue as I got down on the floor to try to help him. He was really distressed though, and despite my support, unable to stand. At this point he began to really panic and then collapsed. His eyes fluttered and rolled back in his head and I realized he was having some sort of seizure. I yelled for Dave, who came and held Buddy’s head while I  hugged and tried to comfort him. His heart was going a million miles an hour and his legs were flailing. He began to froth at the mouth and his bowels let go as did his bladder. He was so scared; as was I.

The seizure lasted almost five minutes and then he struggled to his feet and sort of lurched out the door.

After cleaning up both Buddy and the floor, I called the vet back, and what was to be an appointment for shots now became a work-up. By my description it was determined that, whatever the cause, Buddy had suffered a severe grand mal seizure. I began to wonder whether I’d be getting on a plane on Friday morning or not. We left the office with a prescription for phenobarbital.

I returned to the vet with Buddy for the missed shots on Tuesday and learned that the blood work was all normal. Most likely, Buddy is epileptic. I called the kennel where he boards and explained my reticence to travel now and asked if they were comfortable with his new medical status. Evidently his situation is not so very uncommon and they would have no trouble giving him his medication and felt he’d be safe.

So, shaken, but somewhat reassured, I decided our plans would still be a go.

It is still hard to forget the image of Buddy struggling. Although I am quite matter of fact about death itself, I’m still not too keen on suffering. Watching another being in the throes of pain or fear is deeply unsettling. It also feels extremely intimate and personal,  and there is a part of me that wishes more than anything to turn away.  That said, I have nothing but admiration for those who are able to come forward and offer comfort to those requiring it.

Survival of self is instinct. Helping others is something more. Here’s to all you caregivers who have the courage to get up and do it day after day.