As we rounded a corner on the way to the bus stop on Thursday morning, I had to slam on the brakes to avoid hitting a wild turkey. It was one of a large flock (herd seems more appropriate) of turkeys crossing the road, including a very large tom. Fall in New England.

I’ve been spending a good deal of time in the woods photographing the leaves; I hope to exhibit large format prints of some of the many close-ups.

A week and a half ago, I was a passenger on my neighbor Arthur’s harley, for some open air leaf peeping. We logged three hundred miles on an absolutely sparkling day; it was so much fun. 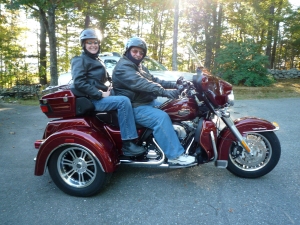 One of the first times I saw Arthur, he was riding a sit down lawn mover while wearing a big sombrero and a bear claw necklace. I decided he was likely a character. And then I met his lovely wife Betty, who was battling breast cancer. Betty and I really bonded, and when she passed away last year, I was heartbroken. Arthur was devastated. This summer he bought the harley (Betty’s name is painted on the back) and got his motorcycle license. Arthur is 73, although he doesn’t look a day over 60. And the bike has been good for him; he says he feels like a kid when he’s riding.

Foot of Mt. Washington; pretending I'm at the wheel

So for some time now Arthur’s been saying, “if it’s alright with your husband, I’ll come pick you up for a ride”. Heck yes it was alright. Seven hours and three stops later, I limped off the bike; saddle sore but exhilarated. Thank you Arthur!

A week ago I met with the surgeon. It had been our hope that the biopsy could be performed via VATS (video assisted thoracotomy surgery), a more minimally invasive surgery. However, due to (once again) the ground glass nature of my tumor (versus a solid entity), the peripheral location, as well as the fact that it was probable that there would be scarring and adhesions from the previous lobectomy, he was not confident that it would be possible.

It was his suggestion that I have a CT scan prior to surgery, and that using the image as a guide, a mark would be placed on my chest above the tumor. He would use this site to attempt a VATS wedge resection, but if it proved too difficult, he would need to fall back on open chest surgery.

I have great confidence in my surgeon (Dr. Doug Mathisen), but the idea of open chest surgery again made me more than a little uneasy. Surgery was scheduled for the following Friday (yesterday), but after a conversation with Alice (Dr. Shaw) on Monday, she agreed that open chest was a lot to go through for a biopsy. In addition, the sinus infection I’d picked up after Sweden tested positive for a gram negative bacteria (Pseudomonas), and I was still on antibiotics. Even a vague possibility of residual  infection entering my chest cavity was a definite con.

So, despite a higher than usual probability of failure and/or post biopsy bleeding, I will have a needle biopsy on Wednesday. All things considered, it still seems like the most reasonable choice. I hope it is successful, and if not, the more radical approach is yet an option.