Sweden all in one

It is absolutely necessary that I sit down this morning and finish writing about Sweden, because I’m getting backed up, as (of course) new things are rolling here as well.

Picking up where I let off…we didn’t go to the little house in the country for the full weekend with Anja and Ingo, as Anja awakened with a fever on Friday morning. I let August sleep in, while I went to work on the internet to secure a hotel for the next two nights. It turned out to be surprisingly easy, perhaps now that the big Diabetes Meeting was concluding. I booked us a room right in the old town, Hotel Rica Gamla Stan.

As soon as we’d checked out, I decided that we would go directly to the new lodging to see if we could stow our bags there. It was a good thing, as they had us in a room with a double bed. Aug loves his mom, but wasn’t into sharing a bed, so they found us a tiny single into which they mashed a cot. They also let us check in early, which worked out well, as August was feeling the need for one more day of rest.

Our room was on the third floor, up a curved staircase of limestone pocked with aquatic fossils. It overlooked a narrow alley, and we could see into the windows of Acne, the fashion house (of interest to my fashionista daughter). August settled in, and Ingo and I went to the open house at IASPIS, which is a government funded artist in residence program in Stockholm. I was intrigued not only by the installations, but also by the level of support given to the visual arts.

I returned to fetch August for dinner, and discovered he had been busy looking online for a good place to eat (access to the internet proved to be a great tool in traveling). There was promising restaurant a short walk away, Den Glydene Freden, where we could sample authentic Swedish dishes. It turned out to be an extraordinary meal (although pricey); definitely a highlight of our trip.

Breakfast at the hotel in Gamla Stan was a revelation, as we lacked for nothing. I was intrigued by the help yourself bottles of vitamins, and the Swedish pancakes were delicious.

After breakfast we boarded the train for Uppsala, as I wanted very much to see Hammarsby, the residence of Carolus Linnaeus. Ultimately this day turned out nothing like we’d planned. It was cold and raw in Uppsala, and after purchasing tickets and waiting at a stop for a bus, the driver helpfully suggested that it was rather late in the season to see Hammarsby, as we would be dropped a significant distance from our destination, would arrive only shortly before closing, and would have to wait another four hours in the middle of nowhere for the next bus. It didn’t take much convincing, and in the bus station (again, so very civilized) they refunded our ticket price. Instead we walked over to the Museum Gustavianum. Much to my delight, they had some cabinets of curiosity on display (one of my overriding passions), and, although I vowed to come back, I left satisfied.

On Sunday, Anja was feeling better, and they picked us up in their little peugeot for the drive to the country.

This was such a magical day for me. They prepared a wonderful meal of salmon and boiled potatoes and fresh greens over which we lingered, and then we bundled up for a walk in the woods where we marveled at the mushrooms, and August and I played with Otto in his wonderful little bark hut (Made by Ingo as a prototype for an artwork; Ingo is also involved with the Tree of Heaven Woodshop in Detroit). 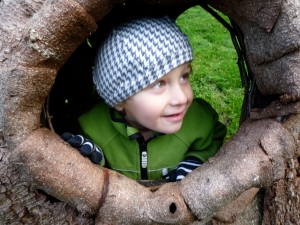 It was quite late in the day when we returned to Stockholm, and our friends bid us goodnight at the hotel Anno 1647, where we would now be staying.

On Monday August indulged me in my desire to visit more museums, including the Vasa Museum, where you view the remarkably well preserved wreckage of a Swedish warship that sank on its maiden voyage in 1628, only to be brought up again 300 years later. For a treasure hunter such as myself, it was mind blowing.

That evening we had yet another splendid dining experience, suspended above the city at the Gondolen. Warm rose hip soup and lavender creme brulee for dessert…

On Tuesday several more museums, including the Historiska Museet, where we were awed by the vast plunder of Viking artifacts. After a (banal,  it really is all the same) meal at Burger King, we met up with Anja for coffee and a walk around Sodermalm. Too soon, it was time to say goodbye (for now) to this person that I had only just met, but somehow felt as if I’d known forever.

That evening,  we were in for a real treat. We would be staying in a ’boutique’ hotel that I had read about in a chichi travel magazine, Hotel SkeppsHolmen. We were going all out for this one night, as I had booked us a large room with sea views. And? It was incredible. Located on an island, we took a boat from Slussen. Unimposing from the outside, but gloriously spare and hip on the interior, the hotel is within walking distance of the Moderna Museet (to which they provided complimentary tickets). I was able to get a dose of art before bedtime and August was content to hang out in the luxurious digs, wearing one of the plush terry bathrobes folded neatly in the washroom. He took not one, but two showers in the ‘rain shower’, and we both slept straight through the night on incredible duxiana mattresses. The next morning, breakfast was sublime.

As much as we would have liked to linger, it was our final day prior to an early morning departure. One last museum, The Royal Armoury, turned out to be a favorite. It displays an eclectic collection of not only armour and weapons, but artifacts such as the bloodstained clothing worn by Karl XII when he was killed in the trenches in Norway in 1718, as well as several stuffed and mounted horses belonging to various kings.

A quick lunch of pizza, the aforementioned Ice Bar, and we bid adieu (farewell, hejda) to Stockholm. We will return!