I’m in Marfa, Texas and I’m having a bowl of green tea ice cream.  I arrived here Wednesday evening after an eventful day of travel (more on that in a minute) In the meantime, what have I been doing since that bloody long post? Well, I haven’t been watching the World Cup, but I enlarged a bed of flowers, bid goodbye to David, Pete, Buddy and two hermit crabs on Saturday morning (they were driving out to Marfa ahead of me with a U-Haul trailer in tow), dined with Mary and Raleigh on three different occasions, tried Pastis from Paris and Compari, walked, watched a couple of movies, read a very good and long novel, painted my dining room acid green, worked and worked on a soon-to-be-posted blog about cancer, drove to Boston for two different appointments, and then was picked up at seven a.m. sharp on Wednesday by my neighbor June for a ride to the airport.

On Monday I had exchanged some emails with my friend Brian, who lives with his girlfriend Jennifer in Baltimore. I had discovered that I had a three hour layover in Baltimore. I’d  queried Brian, a former commercial pilot, for advice as to where one might get some fine fast food in the Baltimore Airport.  Our correspondence went like this:

When I got off the plane in Baltimore, Brian was there with two hot Maryland crab cakes and all the fixings. What a guy! Almost better yet, he hung out with me until my connecting flight boarded and we had a chance to catch up on a whole bunch of stuff. 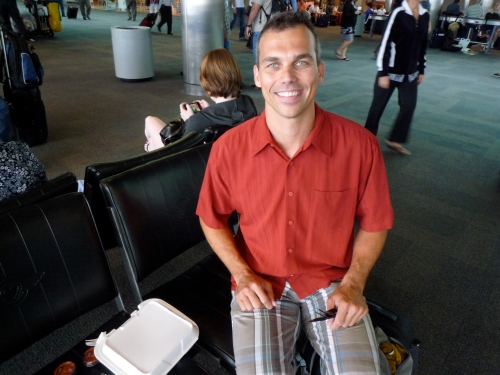 On the next leg of the flight I sat next to a fascinating young man (hi Robin). I slept for the first hour or so, but then we began to chat and he made numbers, of all things, come alive for me.  Robin, who is getting an advanced degree in mechanical engineering, might want to become a teacher and I hope he does, because I’m sure he could inspire a love of learning in his students.

Once more short flight and I was in El Paso, where David was waiting with yet another little picnic meal. I was feeling pretty well taken care of at this point. And then we hopped in his truck for the three hour drive to Marfa, where Peter and Buddy were waiting. I saw both some violent thunderstorms as well as a beautiful sunset before I drifted off to sleep again.

The last two days have involved unpacking the U-Haul as well as hitting a few of my favorite Marfa hangouts (Marfa Book Co., Pizza Foundation, Get and Go and the local thrift store). And now it’s time to go make dinner.

And I’m all caught up.

3 responses to “Here’s the scoop…”