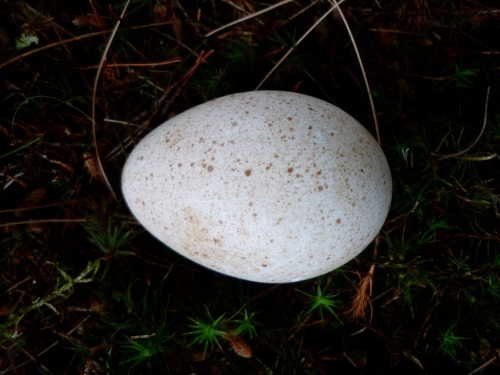 Bike week is over and I can once again concentrate on non-human forms of wildlife. It’s been an exceptional week; particularly in the avian world. The photo is of a turkey egg that seems to have been laid rather inappropriately in the middle of our neighbor’s lawn. David and Peter seriously toyed with the idea of incubating the egg, but in the end the plan was scrapped.

Not too many days ago, we had a bald eagle cruise through our backyard. And then, on Sunday, which happened to be Father’s Day, we were nursing some post taco margaritas on the deck when we noticed what looked to be a glowing red orb on the peak of a sunlit fir. Out came the binoculars and it was identified as a scarlet tanager. Moments later an indigo bunting graced the branches of a neighboring tree, and then the show was concluded with three cedar waxwings perched in a birch tree. Unbelievable.

On Monday, David and I took a walk in the woods and this time we left our dog Buddy at home. Suddenly there was a loud cough and David turned to me to say “was that you?”. Un huh. T’was a bear, heard but not seen, which was sort of unnerving. I made a note to myself to bring Buddy along on my next solo venture through the trees.

And then yesterday, driving up the road, the freshest little fawn I’d ever seen stumbled out of the woods. I don’t think it had ever seen a car before, as it made no attempt to flee. I slowed the car and waited for it to go back the way it had come.

Yesterday I also received an email from my friend and regular commentator Guillermo. He had attempted to post a comment, not once but twice and it was rejected both tries. It’s not the first time that has happened to Guillermo, and I wonder if it’s been an issue for anyone else. Anyway, he forwarded what should have been his comment in the email. Now, I don’t know how many of you read the comments at the end of each post. For me, they are one of the of the most special aspects of this blog: the opportunity for those reading it to say hey and also sometimes to add their own perspectives. Guillermo puts a lot of work into each of his and they have taken on a life of their own. Almost like a blog within a blog and he has developed a bit of a fan club; those who eagerly await a Guillermo response.

So, as not to disappoint, (and with his blessing) I have included Guillermo’s rejected comment, my response, and a subsequent comment here:

Hi Linnea: My comments below were not updated in your blog. Big brother does not like my photo?
When I submitted again I got
“Duplicate comment detected; it looks as though you’ve already said that”

I know, is old age and I repeat myself.

In Toronto everybody is free to breath clean air inside buildings, smokers are free to smoke outside, is democratic, they have no right to pollute the majorities clean air.
Ride bikes  without a helmet or cars without seat belts and your reward is a ticket, if you insist you may get a suspended license. Women are free, have rights over their bodies, free to choose free abortions. In some countries they choose life until they are born and after they choose death penalties and wars. Free to disagree. Not dead penalty here, war in Afghanistan but not with Iraq. In the United Nations qualityof life index Canada is 4 and United States is 15. Live free and die.

I went to pick one of my cancer lottery prices a mountain bike and got a free helmet.
The store was in a part of town with more latin americans, many celebrating with flags their football victories. We stopped at an Uruguayan bakery to buy River Plate delicatessens like empanadas (meat pies), dulce de leche, etc. Disappointed with a closed store when a car arrived and the driver a man in his fifties toll us that they opened Thursday to Sunday, busy on weekends. I responded that I was in the area picking up a bike won in the cancer lottery and he got interested.
He said I will open the store for you.
Inside he ask me if I had cancer, what type and how long. When I said that was lung cancer for 5 years he lifted his shirt and show us a large scar from lobectomy and a colostomy bag. He had lung and colon cancer operations in the last 5 years, he was full of life, strong, energetic, enthusiastic. He said “you now we all die, every day is a gift”. Live free or die.

Dear Linnea I think that our party is going to be longer and busier that Route 66.
My wife said that “1066” was the year of the conquest.
William the conqueror ended England dark ages in an memorable battle.
Funny feelings, is not an Omen but, Guillermo means Williams, my initials are GB like Great Britain, in our war, I hope that in 2010 1066 battles and conquers cancer.
1066 a historic battle game for Peter http://www.mofunzone.com/online_games/1066.shtml

Free bike, congratulations!  What’s a cancer lottery? I’m sorry you’ve been thwarted again while submitting a comment–I don’t know what’s up with that. You were conspicuous by your silence, so I am glad to hear from you. All’s good though; unless you object I shall weave the comment into my next post. Your wife is very observant–1066 indeed! ( is {} a hug?  looks like it)  Linnea

Luck is so important, watching the Football World Cup so many times the ball hits the post and lady luck decides the score. I always play my cancer center, the Princes Margaret Hospital lottery for cancer research and won small prices 3 out of 4 times. Lots of donated prices, a few big like houses, cottages, cars, cash, etc. Cost $100 per ticket or 3 for $250, this time I got the 3 prices, the bike worth $400, a Fuji digital camera over $100 and $100 cash. http://www.pmhf.ca/Pages/Lotteries/FactSheet.aspx

All’s good is Allah is good? Argentineans give big hugs and kisses, just watch Maradona hugging and kissing his players in every game, so 4Y a big  {} or an 88  used to say “kisses and hugs” among morse code and amateur radio users, as it resembles an image of two lips kissing. Is 4 times 22 your lucky number that resembles spooning.

See how Maradona helped his luck with the Hand of God:
Argentina v England, played on 22 June 1986, was a football match between Argentina and England in the quarter-finals of the 1986 FIFA World Cup at the Estadio Azteca in Mexico City. The game was held four years after the Falklands War between Argentina and the United Kingdom and was a key part in developing the intense football rivalry between the two nations. It was also a match which included two of the most famous goals in football history, both scored by Diego Maradona. His first, after fifty-one minutes, was the Hand of God goal, in which Maradona scored with an illegal, but unpenalised, handball. His second, after fifty-four minutes, saw him dribble past six England players, and in 2002 this was voted Goal of the Century by FIFA.com voters. Argentina won the game 2–1 and went on to win the 1986 World Cup.

Keep encouraging my misbehaving, be free to weave, do embroidery or netting with my comments.
Guillermo