My latest scan/radiology report and my response

This morning I put on the t-shirt that Jemesii had made last year for Mother’s Day.  Call it dressing for success.

On Monday I left the house at 6:45 a.m. for Boston.  In places the highway is bordered by steep rock walls, which in the warmer months shimmer with trickling ground water.  Once winter sets in, the seepage forms thick columns of ice which have the appearance of frozen waterfalls.  Some of these columns are a dirty yellow, others an unearthly turquoise, although most are a glistening white.  The early morning sun was was hitting them at such an angle that they absolutely sparkled.  Sadly, there was also a dead coyote in the median.  Last winter, on a morning where I had to leave the house at 4:30 a.m., another coyote crossed the road at a run in front of my car.  It was dark and I never saw him until he entered the beam of my headlights.  Instinctively, I swerved and braked, but was unable to avoid him.  It was a glancing blow, and he kept moving.  Later I found a small tuft of golden fur wedged in my front bumper.  I was heartsick, but hoped that perhaps he had suffered only bruises.

Traffic was stop and go once I got closer to Boston, and I arrived at the hospital just prior to my 9:30 labs.  An hour later, I had my appointment with Dr. Shaw and we reviewed my latest scans.  I have learned that there is often a significant difference between the way a radiologist’s report reads and my oncologist’s interpretation of the report.  In this case, the hard copy states:  “Increased size of ground glass nodule on image 42, concerning for an enlarging metastasis. Multiple other stable ground glass nodules”.

Alice (Dr. Shaw) pulled up my last two scans for comparison, and explained that the morphology of the nodule they are referring to, although characterized as having previously measured 7 mm and now 11 mm, is actually unchanged as far as scale.  What it has done is consolidate somewhat.  This could indeed mean that my cancer is on the move, but there is still a chance that it is inflammation that we are looking at.  The area where the nodule appears in my lungs is where I once had a great deal of disease, a fact which I suppose could support either scenario. It is a positive sign that the other findings are stable, and that there are no new nodules noted.

So, of course, we talked about the what if.  There are a number of treatment possibilities this time, as a solitary nodule is more manageable than the diffuse disease I had previously.  In the meantime, both Alice and I remain quite optimistic, and I am continuing to hone my life force to a sharp point (hence, today’s outfit).

After my appointment with Dr. Shaw and my trial team, I went out for lunch with my dear friend Melinda.  I had another appointment in the afternoon with my thoracic social worker, Mary Susan.  Melinda ran some errands and we met up again for coffee before we each hit the road.  Rather than heading home to New Hampshire, I drove to Newburyport  for a sleepover with my friend Sadie.  That evening we had tapas and red wine for dinner and caught up on many months of news.  Yesterday we tooled around the shops and went to lunch at Grezzo, a restaurant that prepares vegan and raw food.  I wasn’t sure what to expect, but I ended up being absolutely delighted, as it was one of the tastier meals I have ever had.  Click here for a link to the Grezzo website which also has some information about the raw food concept.

Today I need to pack, as we are planning to leave tomorrow for California.  Of course, the weather may not cooperate, as we’ve supposedly got a big winter nor’easter heading right for us.  The plan is to travel to the Bay area, where we will hang out with good friends Wendy and Cristina, before heading north to Mendocino.  We’ll end our California sojurn with a quick stop in San Francisco and a visit with my friend Kate and her husband Dave.  The boys will head home before me, and my next stop will be Utah, where I will be joined by my sister Bink and brother John and we will spend a few days with our mom and stepfather Jim. Then, on to Colorado where I will kick back with our son August, Bink and John’s families, sister Ro and her husband Brian, as well as numerous friends and cousins.

It should be so much fun, and I intend to post from the road as well.  And when I return home, I will jump right back into painting, which has become quite an obsession.  I am working on a whole slew of them, and several are near completion.  Here is a peek at some of the works in progress: 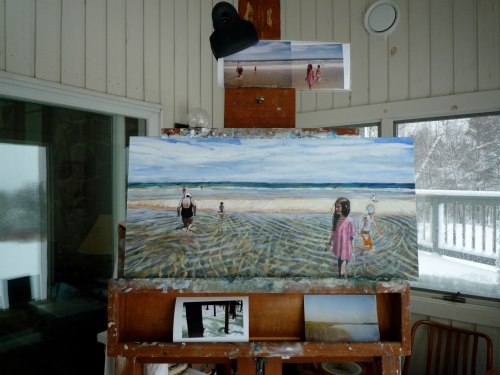 6 responses to “My latest scan/radiology report and my response”