The day(s) after chemo

Within 24 hours after a chemotherapy session, we would travel back to the hospital, where I would receive an injection of Neulasta. Neulasta prompts the body to boost production of white blood cells, as low white cell count (neutropenia) can result in secondary infections.  In addition to feeling wiped out, I now began to experience intense bone pain that would last for several days. This is a common side effect of Neulasta, and my oncologist had preemptively written a prescription for Percocet.

I was also experiencing the most intense heartburn of my life, ringing in my ears, and a bowel that would lurch between diarrhea and severe constipation. Exhausted, I spent lots of time sleeping in my ‘lazy girl’ recliner, but my sense of smell became disoriented (along with taste) and I couldn’t bear the smell of our newish oriental carpet.  David ended up having to haul it outside where he gave it an intense shampooing.  Luckily, it being June, I had the option of hanging out in the hammock on our screened-in porch, and it soon became my second home.

I was not without an attendant angel.  Our friend Miranda organized a schedule of prepared and delivered meals during the many weeks of chemotherapy.  She enlisted neighbors, friends and acquaintances, and an amazing bounty of food would arrive each evening.  Certain dishes I would have to avoid, both due to my repressed immune system and my skewed palate, but it was a huge burden off of David’s shoulders and great fun for my kids as well.

By the end of the second week, my hair began to come out.  I was taking a shower, and as I shampooed my head, my hands filled with clumps of hair.  I hadn’t been very concerned about hair loss, but when it happened, I became rather emotional. After I toweled off, I asked David to shave my head.  Soon the stubble would fall out as well, as well as any remaining hair on my body.  There was now no doubt that I was a cancer patient. 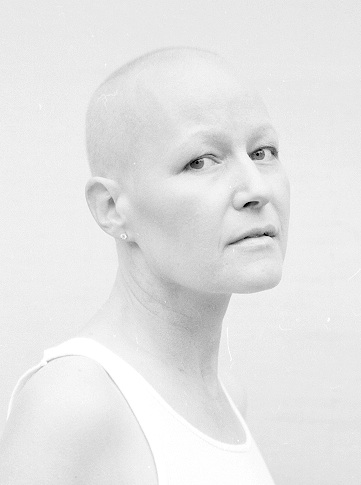 This entry was posted in Chemotherapy, Treatment and tagged chemotherapy, lung cancer. Bookmark the permalink.

5 responses to “The day(s) after chemo”