I am digging myself out of what would seem to be an annual January malaise. November and December have a tendency to build to some sort of happy frenzy, which, though exhausting, can make January seem rather dull and flat in comparison.  It hasn’t helped that the temperatures have been in the single digits for the past week, which feels much colder still when you account for the wind chill factor.

January did conclude with a celebration, however, as David turned fifty.  We had a lovely party at Mary and Raleigh’s house, for which Jem and Peter made whimsical pipe-cleaner crowns.  I received a flip video recorder for Christmas, and as dinner began, we passed it around the table.  I will have fun editing the resulting footage.  In the meantime, here are some little stills of the festivities:

In addition, a larger shot of one of the wonderful pipe-cleaner crowns: 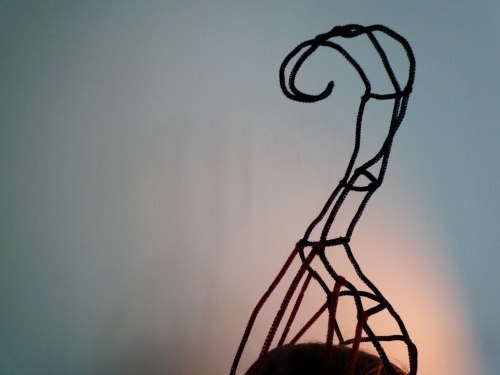 Today I was able to paint again.  It had not been possible for several days due to the extreme cold.  My ‘studio’ is actually a glassed in porch, euphemistically referred to as a “three season room”.  We added electric baseboard heating as well as a ventilation fan, but when the temperatures drop too low and the wind is blasting, it is impossible to get warm in there.  In fact, it does double duty as an overflow icebox.  Today I removed the left-overs and picked up my brushes again.

Tomorrow, I will pick up a thread I dropped long ago.  I will describe my experience with traditional chemotherapy.