A gorgeous day in November

Yesterday we were lashed with the remnants of Hurricane Ida, but when we awakened this morning, the rain had been replaced by a thick fog. That burned off rather quickly, and today has been warm and moist: almost like a California winter.

David and Peter worked to clear some small brush, while Buddy happily hunted for chipmunks.  Peter found a sweet little bird nest.  Woven in with the twigs were blue bits of nylon from a tarp that had covered much of the house while it was being renovated. In addition, there were strands of horse hair:  an old mattress stuffed with horse hair has been flung over some hay bales as a target for Pete’s bow.

I must still wear my aircast–at least until Tuesday when I will have an x-ray of my ankle done.  I have been using my crutches less and less, and today I left them inside when I ventured out to join the boys.  I took a hike (a bit of a hobble, actually) to just below the granite ledges.  I hadn’t been to this part of our yard since late September.  I brought my camera with me, and the photo above is the best of today’s efforts.  The moisture makes the oak leaf look almost like snake skin.

The smells outside were amazing as well.  Leaf litter, sap, moist earth.  As I walked through the woods back up the hill, I almost stepped on a garter snake basking in the warmth. Suddenly I was aware of a sound:  like faint rain or something sizzling.  I looked down and the leaves were covered with a huge hatch of little tiny black bugs, about the size of fleas.  There were millions of them, so dense that individual leaves appeared dipped in pepper.  They were all moving, and the sound was from their bodies as they hit the leaves.

The photo at the bottom is of a fungus growing from a fallen birch near the house.  Peter thought it very funny, and so I decided to include it as well. Happy Sunday. 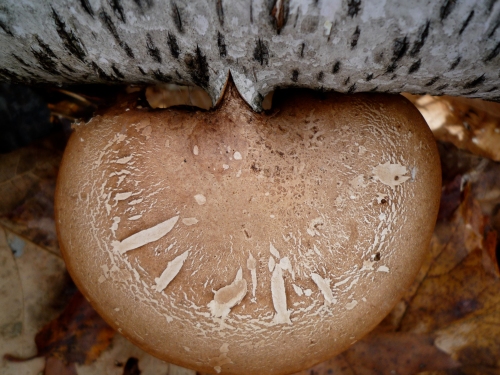