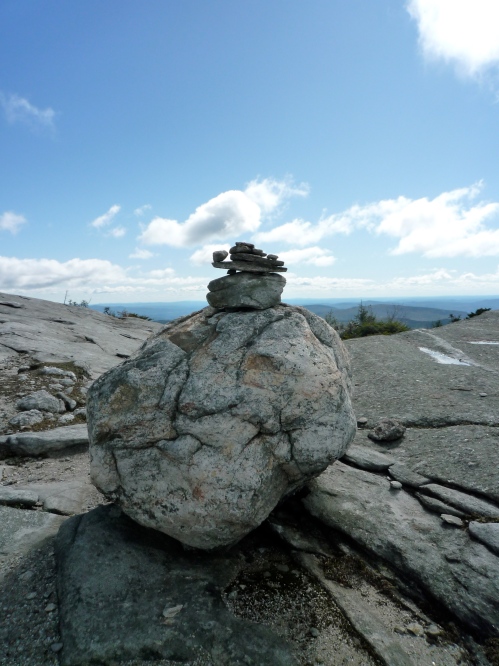 On Friday, I went hiking to the summit of Mt. Cardigan with my son Peter’s school. The trail was very rocky and a steeper ascent than I had anticipated, so I took a lot of breathers. When I got to the top, the view was AMAZING:  a total 360. Weathered granite covered almost every surface, with only an occasional bit of greenery. The wind blew like crazy, but we were able to find a place that was somewhat sheltered from the wind and the sun was lovely.  That crazy wind was cold though, and we were ready to start our descent before too long.

Common wisdom holds that going down is easier than going up.  True, (generally), but often more treacherous as well.  There were so many of us heading down, that we had a bit of a bottle neck.  Not far from the summit, a young fellow sought to get ahead, and accidently checked me.  I lost my footing and went down hard.  The sudden pain alerted me to the fact that I had badly twisted my ankle, but when I looked at it, I understood immediately that it was broken.  Foot pointing the wrong way, bone where bone shouldn’t be, that sort of thing.

Let’s see–there were so many bad puns that would have been suitable for the title of today’s blog:  A bad break (thanks Katie); And now for a quick ankle break; Not sure where I stood; …ah, the possibilities.  Anyway, there I was, more than a (steep) mile from the trailhead, and totally unable to move.

Peter was so worried about me, but as I was able to stay very calm, he also maintained composure.  Several staff members immediately attached themselves to us, and, luckily for me, one of them was an EMT.  Her name is Linda and she is my new BFF. A 911 call was placed and arrangements made for the search and rescue squad to come and get me.  In the meantime, every effort was made to keep me warm and as comfortable as possible.  I placed a quick call on my cell phone to my daughter, Jemesii.  I basically said, “Hi honey,  This is Mom.  I’m sitting on the side of a mountain with a broken ankle.  Could you get to our place in NH?”  That was all Jem needed to hear.  The girl got on a bus and painstakingly made her way to our town.  Let me tell you, Jemesii is exactly the right person to call in a time of crisis, and this isn’t the first time I’ve had to do so.  I also left a message with my husband David, who, unfortunately, was away on business in Colorado.

As we waited for the crew to assemble and make their way up the trail to us, I had plenty of time to think.  I have always wondered if tears have more to do with fear and stress than pain.  I was in a lot of pain, but not really too worried or frightened.  As I said to Peter, “we can handle this, we’ve been through worse”. Also, my new BFF and the other assembled adults had a really good handle on the situation.  So, aside from continuing to stay calm, my primary task was to handle my pain.  And I did okay.  I never felt like I wanted to cry, and when the pain would get too intense, I would repeat the mantra in my head that I have used to calm myself ever since I learned it in a transcendental meditation class thirty years ago.

And then my transportation arrived, the Canaan volunteer fire department.  A quick splint was placed on my leg and I was carefully lifted into a litter.  Chemical hand warmers were placed on my chest (they were great, as I had really begun to shake), I was wrapped and strapped, and then this incredible process of carrying me down the trail began.  In addition to the fire department, some Sant Bani staff members and a NH Fish and Game employee were my porters.  The “ride” was amazingly smooth and well coordinated, with Linda periodically reminding people to not jostle my ankle (I really know how to pick my friends).  I joked at one point that this was a great way to see the leaves.  In truth, for one of the first times in my life, I was only able to look up.  Staring at the sun dappled canopy of the forest was a pretty amazing vantage point.  Linda even popped her sunglasses on my face to shield my eyes from falling debris.  I felt incredibly safe and well taken care of and have a whole new bunch of heroes now.

When we got to the bottom, an ambulance was waiting.  Linda would drive my car home (which was a good hour and a half distant) and drop Peter off there:  his sister would join him shortly.  I was going to the hospital alone, and although it would have been nice to have someone there, it wasn’t necessary.

I’ve always wondered what the inside of an ambulance looked like.  I would have plenty of time to study the interior of this one, as we had a long (and bumpy, ouch) ride ahead of us. I can’t take any medication without prior approval because of possible contraindications with the trial drug. Calls were placed to Dr. Shaw for approval (she always calls back, and she did).   I was given saline, oxygen and zofran, but a cross check was needed for the morphine.  It turned out to be a busy Friday, and the paramedic had to jump off for another call, so it was going to be a while yet before the ok for morphine was communicated to the staff of the Dartmouth Hitchcock Hospital.

An x-ray confirmed that my ankle was indeed broken.  Broken in at least three places, and would require surgery.  I finally got some morphine as well as some fetanyl (it had been almost six hours since the accident). My sock and jeans were cut away and a splint was placed on my leg that went to mid thigh.  Thanks to the powerful drugs, I have no recollection of this procedure, which couldn’t have been pretty.

A week would have to pass before surgery was possible, in order for some of the swelling to abate.  I was discharged and Jemesii, who had a two hour drive from our home to the hospital, arrived a little after 10pm with Peter.  She had been on the road for almost 14 hours by the time we arrived back home.

One quick slip of the foot, and, well, now you know what happened.  I’m just so grateful to all of those who rearranged their Fridays to get me down that mountain. 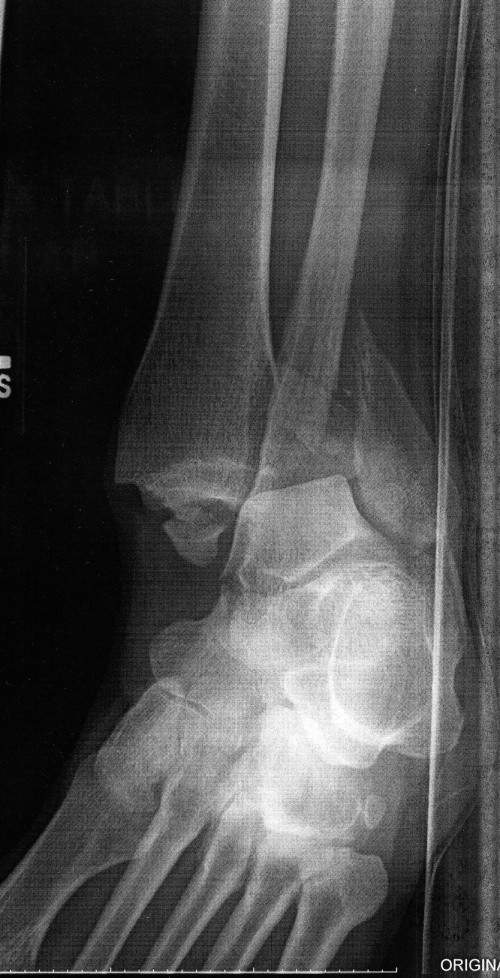 This entry was posted in Living with lung cancer and tagged breaking an ankle, search and rescue. Bookmark the permalink.