Blast from the past

This past weekend, I hosted a mini reunion at our home with four of my closest friends from childhood. In high school we were good girls and good students.  We weren’t in the “fast” crowd, but it was certainly a fun crowd, and we have the memories and photos to support that view. 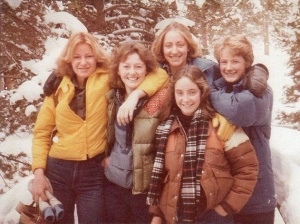 Connections between the five of us had been a bit sporadic in the last thirty years. Our high school has been irregular at best at organized reunions, and even when they were scheduled, not all of us have attended (that would be me).  So we just decided to have our own.  And what a time it was.  So much has happened in each of our lives since the year we graduated (class of ’77).   Between us, we have six kids,  a matching number of marriages, two divorces, and four deceased parents. One of us has never married but has travelled the world instead.  Four of us have advanced degrees and one of us is a corporate lawyer. One of us has been a co-recipient of a Nobel Peace Prize, another has struggled as a single mother.  We are of different faiths, from devout to athiest.  One of us has cancer.

Our experiences as adults have been radically different from each other, and yet our bond from childhood remains strong.  When we sat around the table that first evening, I couldn’t help but notice that we had all aged.  Oddly–that perception diminished the more time we spent together, and soon I was seeing us just as we were thirty plus years ago.  The first morning we stayed in our pajamas until early afternoon–again, just like the slumber parties of old.  Although David was still in Marfa, my son Peter joined us at times.  It was sweet to see him respond so warmly to my childhood friends.  He was genuinely sad when it was time for them to go, as was I.

It all went too fast, but as we parted we pledged to not wait so long before getting together again.  It’s a very good feeling to reconnect with people from your past and to realize that you would choose to be friends again if you had met just yesterday.  It is an affirmation not just of friendship, but of the choices you made when you were younger. 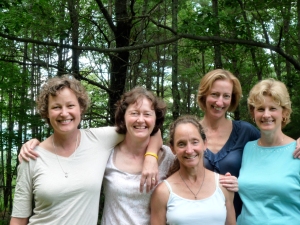 2 responses to “Blast from the past”